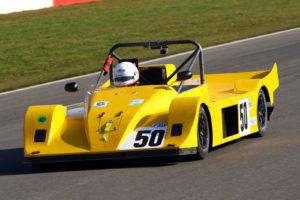 So, time for catching up. As I mentioned, the car was tested a while ago by Anthony Reid and it was featured, along with some other RGB cars, in Autosport a while ago. The review was, in general, pretty favourable towards my car and the formula in general. Anthony is the chap driving the car in the photo on the right.

So, after the pre-season shenanigans, it was time to set off for a race meeting. We dutifully traipsed up to Donington park at the end of March, slightly dubious about the weather forecast. It was really cold and there was more than a chance of snow being predicted. 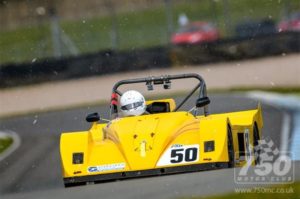 And so it turned out. The race meeting was eventually called off, but not before we’d done our qualifying session. It was a surreal experience swooping down the Craner Curves, occasionally flat in 6th, but with snow flurries blowing across the track in front of me. What started out as flurries pretty soon became much worse weather and a lot of ice was building up in various places as the temperature went from above freezing to below.

At the time of writing, it seems as though there’s going to be a replacement meeting at Anglesey later in the season, but the details are completely clear at the moment.

After that, it was nice to see that the forecast for the Brands Hatch meeting was good. In fact, it would be a good test of the cooling systems after the winter ducting modifications.

But, as it turned out, it was perhaps one of the worst race meetings ever, leaving me with a real quandary that I’ve still not solved.

Back to the narrative though. I’d booked the test day on the Friday and that went very well. I had a merry time tweaking suspension and dampers and found a couple of things out about the setup. What’s more, although it was one of the hottest days of the year so far everything thing together OK.

Over the winter, I’d re-installed the cooling thermostat on the advice of the engine builder and the water temperature can be seen cycling around 82C with the oil temperature reaching about 105C. Both of which are fine. The one problem is an issue I’ve had for ages in the that the battery voltage never actually gets to the 14.1V, or thereabouts, that you’d expect. I’ve changed all sorts of things over the last couple of years and never got to the bottom of this. On the runs in question it was sitting stubbornly at about 12.9V. The battery seems to be OK, but this isn’t good.

What’s more, I did a lap in 49.2 seconds. Given that the car is about 20kg heavier now, as the regulations have changed, that was rather nice.

It’s a pity it all went south…

On the way into qualifying I had real trouble starting the car before the noise test. Possibly that’s because the fuel was so hot on a very hot day, but not a good sign. However, the car was running OK until I got on track. But, after a lap and while going around Paddock Hill bend it suddenly cut out and I coasted to a halt off the circuit.

Now, one problem I’ve had before is the nasty master switch dying. So much so that I change them every year to try and forestall such behaviour. On this occasion, though, it seemed fine in that the data logger was still working so although the engine was completely dead the main switch must be fine. So, at the end of the session, I got towed back to the garage and set about finding the fault.

After much probing, fuse testing and head scratching, all of these ably assisted by Charlie, I found that the problem was indeed the master switch and rather than it being the main component of the switch  that had died it was one of the subsidiary bits, that actually switch the low current stuff. I fixed it, you’ll like this, by turning the whole thing off and on again. Of course, if I’d done that by the circuit I could have just gone on my way.

So, after getting the nice clerks to allow me to start at the back of the grid, we went out for the first race of the weekend. Round the first lap I went, and miraculously managed to avoid the incredible carnage coming down the hill from Druids on the first lap. (Jonathan had spun, in almost Grosjean style) and cars went every which way. Having missed everyone, by some miracle, I got going and when I got to Clearways the car just suddenly swapped ends on me and I ended up in the gravel.

Unfortunately, at that point I took leave of my senses and after the marshalls pushed me out I carried on, studiously ignoring the temperatures. I actually finished the race by which point the car must have had no coolant in it at all. It wasn’t running too well at the end although I must have decided to not actually look at the numbers in front of me…

Back in the garage, some diagnosis started, until I discovered these issues. The thing was, why had the car suddenly stopped cooling itself? More diagnosis followed until I found that the fuse in the line that powered the water pump had blown. In fact, it seemed a suspiciously small value fuse. I suspect what I’d done is inadvertently swapped this fuse while diagnosing the qualifying issues. The fuse had blown, the pump stopped and the car had practically instantaneously boiled over. This had dumped coolant on the tyres at which point racing stopped.

The thing was, what damage had been done? After putting everything back together I changed the oil and that looked OK. With coolant reinstated the car seemed to be working OK, although that was only bumbling around the paddock. So, I decided to just go for it in race two and see what happened. I also reprogrammed the dash so that if the temperatures got too high all sorts of alarms would go off accompanied by bright flashing red lights.

So, it was back to the back of the grid again. This time I got to the end of the first lap and, turning into paddock hill bend, I suddenly spun off again and, as I was slowing down in a cloud of gravel dust, I could see the twinkling of red lights through the gloaming. 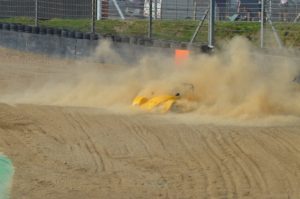 Looking at the data later, it’s clear that the same thing had happened, although this time the water pump was still working. As such, it seems that something had properly broken, be it the engine or the water pump. So, I’m going to have to change a bunch of things.

2 thoughts on “A cacophony of ice and fire”