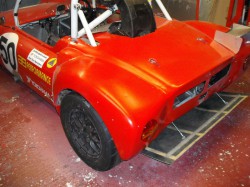 We’re getting close to the final RGB meeting of the year and I need to drag myself away from the daily grind, which seems to last all week long these days, and get the car ready.

Most importantly, as you can see in the photo on the right, I’ve splurged, I think that’s the technical term, some red paint around and put the car back together. You might also note that I’ve re-instated the undertray extension (I hesitate to call it a diffuser for reasons that RGBers will understand which I’d taken off for Anglesey. In a nutshell the handling at Anglesey was so horrible that surely it must have been helping a bit. 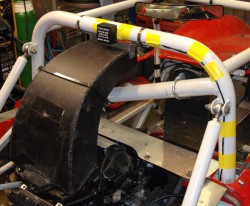 Along the way I’ve done some minor things. For example, I’ve replaced the rain light, seen here. I’d broken this while hopping out of the car when I stopped in the first Anglesey race. It’s always been a bit vulnerable as it sticks up a bit above the cage and when exiting in a rush, pursued by a bear, it’s far to easy to sit on. As this time I’d done a better job on it than I’ve managed previously I’ve bonded a small aluminium plate to the back of it, with the ever-present PU adhesive, and arranged for it to be slightly lower. Hopefully, when the driver plonks his fat arse on the roll cage it’ll be slightly harder to break this time.

I used the same adhesive to bond the left rear light unit back into the bodywork (next time I’m going to mount the lights on the chassis).

The only thing left to do is to sort the dash display. You may remember that I bought one of Race Technology’s Dash-4 displays earlier this year. I’ve actually been deeply unimpressed with this, mainly because it doesn’t calculate the gear correctly, because the display is so reflective that it’s nigh on invisible and because it seems deeply incompetent at seeing the track markers and telling you the lap times. It does have the advantage that it’s weather proof which is why I bought it but that seems a minor issue when it doesn’t actually work.

I’ve been in a long discussion with a support bod at RT who is of the opinion that I ought to use a new GPS receiver. So, I’ve bought one and will be fitting it. If that fails I shall go back to the old Palm-based display and work out a way of making it weather proof. That might have been clunky but at least it mostly worked. The only problem is, to use that I’ll have to downgrade the firmware in my data logger, which might not be possible.