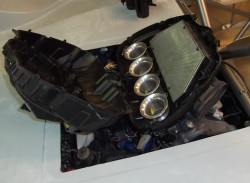 Well, even though I hate the circuit, I’m now aiming for the next race at Rockingham which will take place on 5th and 6th of July. What’s more, that’s the date of the annual RGB marshals’ BBQ so I really have to be there.

As such, I’ve got a real mountain to climb although I think it’s just about feasible. Getting some time for testing sounds a bit tricky though. 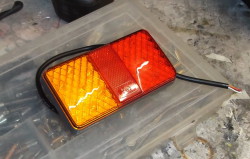 On a brighter note, I am getting onto a collection of things you might think of as being minor. One of these was to check that the engine still works. As part of that I refitted the velocity stacks, as in the photo at  the top of this post. They’re nice and shiny, aren’t they?

I’ve also been acquiring the few other bits that I need. For example, the next photo is some neat little LED lights that I’ve bought for the rear of  the car. They look a bit like trailer lights but they should do the job. The intention is to mount them directly to the chassis, in some way as yet undetermined, so that I don’t have to disconnect things every time I take off the rear deck. The only problem is that as they’re LED lights I’ll probably need a resistor to load up the flasher unit so that it doesn’t think the indicator lamps have failed. 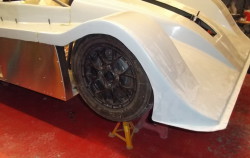 I’ve trimmed the bodywork so that it doesn’t bash into the wheels, here’s an example. As far as I can see all the planning that was done with the buck originally so as to make sure that it missed the tyres has worked out. Also, as I thought, I’m going to have to mount the front lights in bulges of some form. That’s a little way down the list at the moment. (The suspension is on full bump in this photo in case you’re a bit concerned.) 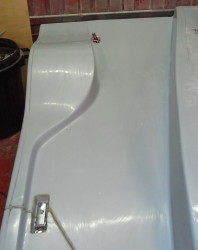 I’ve now mounted the bodywork to the chassis by a collection of bonnet pins. You can see one in the photo. They’re a bit ugly these pins but they do work very well. I’d rather they were flush mountings but these ones will do for now,

With the body mounted it was time to fit the inner panels which go along the sides of the chassis and essentially stop the driver being deluged by rubbish. These were monumentally tedious to fit as I had to take much of the front suspension off and disconnect a lot of the sidepod. However, I got it done eventually at the cost of a thousand or so bits of GRP stuck in my skin.

Most of them are still there as I type this…

In between all this fun I’ve filled the engine with coolant and oil. After the usual faffing about making sure that I’d got some oil pressure I finally plucked up the courage to start it. As seems to happen so often it just started. Of course, without a silencer it made a truly horrific noise but it did work. That at least means that the engine loom is mostly working which is a very good sign. 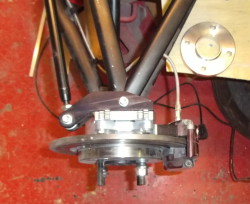 I think one of the biggest problems I’ve got  left is what I’m going to do about some wheels. I’ve been thinking that I could make the old J15 wheels fit, although I’d have to grind the corner off the brake calipers. However, I’m no longer sure that that’s correct so I’m going to investigate other possibilities. I know Andy has specified some snazzy 2-part wheels but they’re horribly expensive.

2 thoughts on “Aiming at Rockingham”