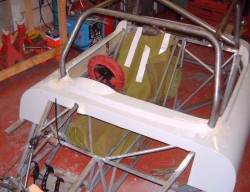 … I will saw this attractive young woman in half. Well, I will in a minute but I need to explain why first.

The thing is, I wanted to check the steering rather more carefully, and perhaps change the routing of the column a soupçon. In order to do that, I needed to check how it fitted under the bodywork. The problem is, I had to do lots of faffing around to get the central portion to fit over the cage; for example to allow the front hoops of the cage to stick through the bodywork, and also to allow the steering column to poke through the front of the central bodywork section. You can see both of these in the photo on the right.

The problem was, even to get the bodywork down here I needed to fit the rear portion around the cage’s rear hoop. I always knew this was going to be tricky as I’ve got the long wheelbase version of the chassis, which is 60mm longer at the rear. The problem is, the bodywork isn’t. Longer, that is. That meant that the rear section of the bodywork was pretty much in the same position as the rear hoop and that wasn’t going to work.

I discussed this with Jeremy right at the start and the original plan had been to split the bodywork around the rear of the central tub area where the shape is essentially a 2D curve. That means that it can be put back together with a 60mm spacer of some form without messing about with the shape. I had originally intended to leave this until a lot later in the process. However, as I was doing the steering it seemed more and more as if I was going to have to cut the poor girl in half right now. 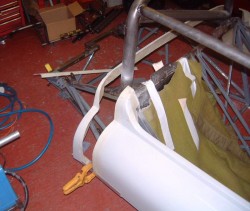 So, I did. Not without a considerable bout of loin-girding though.

The end result is shown in the photo, although the rear bit is just resting there at a jaunty angle hence the variable gap. The plan now is to seal this up with a strip of aluminium, riveted in place with the gap maintained at 60mm. Once I come to finishing off the bodywork, I will put some release film under the aluminium and layup some gel and CSM on the inside to extend the bodywork. Using the film should get a pretty good finish on the outside (it’s shiny stuff that doesn’t stick to resin at all) without resorting to excessive application of elbow grease, a commodity in short supply around here.

I’m hoping that with the aluminium attached the bodywork will be a bit more robust; at the moment it’s rather floppy because the two sides are no longer attached at the rear. What’s more, I’m hoping that I’ll be able to remove it from the cage without any further surgery. That was, after all, the reason for making the cage backstays removable.