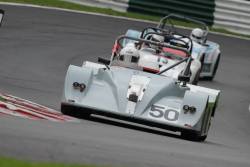 So, we’re already at the end of the season and we all made the final trek to deepest, darkest, Lincolnshire for a double header at Cadwell Park. This circuit is unique in the UK for the combination of elevation change and general twisting and turning. There isn’t really much of a straight there and it needs a huge amount of work to build up to the flow around the circuit  that’s needed. (Along with the requirement at one point to just grab the car by the scruff of its neck and throw it down a particular series of bends.

The photo on the right is due to Bryant Photography, have a look at their Facebook page.

After the meeting at Silverstone, see the new picture on the left, I didn’t really have too much to do to the car. The main thing was to continue efforts to get the oil temperature down. In order to help with this I plumbed in the oil/water intercooler on the engine for the first time. This is the standard thing used on the ‘bike and many people leave it out of circuit. However, it seemed a good idea to get whatever cooling I could so I took the seat backs out and added a collection of plumbing. Of course, I’d no idea whether it would work or not at the time.

I also looked at ducting the output of the oil radiator. However, I’m pretty sure that I really need to make a proper nozzle on the exit. As I think I’ve mentioned the obvious problem with getting air out of the oil cooler is that there’s a socking great exhaust in the way.

For Cadwell I’d also decided to shorten the gearing so I changed the drive sprocket for a slightly smaller one. The other main thing I did was to drop the front of the chassis to put about 10mm of rake into the setup. The car looked slightly nose up at Silverstone (see the photo above) and I’d had a few bits of understeer so this might well improve things.

Anyway, after much faffing about I’d managed to book myself into the test day at Cadwell so we traipsed up there on the Thursday evening. As always with Cadwell there isn’t a decent route and whichever way you go it seems to take ages. When we got there we were in one of the less salubrious parts of the paddock but we soon made it home and prepared for the day tomorrow.

What is clear with the new car is that I’m still getting the driver up to speed. Throughout the test day I went faster in every session, the best times in the sessions were 1:40.13, 1:38.73, 1:37.00, 1:36.49, 1:36.69. There should have been 6 sessions and I was planning on bolting on the race tyres (that is, I bought them this year rather than two years ago) to see where I got to. However, I had a recurrence of a problem that I’d found at Silverstone, which is that the bolts that hold the two halves of the rear left hub together were coming loose. That isn’t very clever and I need to find out what’s happening as it’s potentially rather dangerous.

So, I was left with just bolting on the race tyres for the first race day. At the time I was a bit disillusioned about the test day times as I’d ended up about as fast as I’ve ever gone in the J15 which isn’t very clever. The theoretical lap time (the lap formed from the day’s best sectors), though, was a lot quicker so I could clearly do something.

Come qualifying the next day I set about going a bit quicker and this time managed a huge improvement to 1:35.02. That’s a lot better and I’m pretty sure is quicker than I’ve even been round Cadwell before. Doubtless some of this is down to the better tyres but I think some of it must have been me. I was certainly a lot quicker around Coppice, the first turn.

For the race I decided that it was daft going out on circuit without changing something so I increased the rear spoiler angle. There are a couple of corners at Cadwell that are really limited by rear grip, in particular Charlies 1 and 2 which lead onto the Park “Straight” and the fastest bit of the circuit.

The race was quite fun, although really uneventful. I got a rather crap start and Austen and Dave got past me. I’m always a bit tentative at the start at Cadwell because it’s so narrow but I need to be better than this. However, I got past Dave and Austen on the first lap and then I was a few seconds behind Colin. This was almost like old times when we’d had great fun at Cadwell. As the laps unrolled it was clear that I was catching him. In particular, I was making up time under braking at Park (I must say the Sabre chassis seems awesome under braking) and through the Hall Bends where I was really managing to just hurl the car down the road, taking lots of kerb along the way. Unfortunately, just as I was thinking that I’d try outbraking Colin at Park on the next lap the race was red-flagged. The cause was a quite horrible accident that Steve had on the run from Mansfield to the Mountain. He had complete steering failure and just went straight on into the barriers. All of us are checking our steering as I write.

I ended up 8th with a fastest lap of 1:34.22. It’s only a couple of years since that time would have put me third but things have really moved on. All the same, it had been fun and I seemed to have re-found my Cadwell mojo.

Here’s the video of race 1:

The Sunday dawned and the weather was still holding up. Today was the last RGB race of the season… As things had gone well yesterday I decided to try increasing the rear spoiler angle some more… Can’t be a bad idea, can it?

Yet again I got a rubbish start and ended up with Rob in front of me in his black Spire. Rob used to be a real mobile road block but he’s got a lot quicker this season. I managed to get a nice move on him at the top of the mountain (apparently he was a bit concerned about the mountain as he fell off there in no uncertain terms in testing) and after that I was after Colin again. However, I didn’t have the legs on him this time; the top speed was well down on what it was, as a result of the spoiler I’d guess. After a few laps the race was red-flagged. I don’t really know why, but I suspect it had something to do with Olly who went some way off the circuit at Park and was distinctly absent from the grid at the restart. Come the restart I got swamped again and after disposing of an annoying class F car I was well back. Rob was in front of me again but he had the good grace to fall off in front of me at Charlies 2. I found out later that he was sure I was going to get past him at the mountain again and, as such, he was a but psyched out! After that I had a bit of a lonely race to the chequered flag. I’d been held up so much that I couldn’t manage to get back to the race in front of me and as I was going a lot slower than I should been I was a bit stymied anyway.

Here’s the video of the race, both parts of it:

With that the season’s at an end. We do, of course, have the Birkett coming up which we’re all looking forward to. After that, though, it’s going to be time to wonder what to do to the car over the winter. Needless to say, I’ve got a jobs list a mile long. Top of the heap, though, is the much mooted carbon bodywork…

One thought on “And so it ends; again”