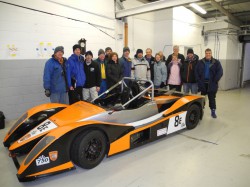 It’s only just occurred to me that the 2012 season was bracketed by two trips to Silverstone. The first, back in March, was the start of the RGB season and the last was the final race of the season, the annual Birkett relay.

If you remember back that far, last year’s Birkett was a real damp squib as I blew the engine on the test day. (Now I think about it, I’ve recently left a bit of a trail of dead engines. I don’t think I’m too amused about that.) All the same, with luck this year would be better. As before we got to Silverstone (through some torrential rain) on the Thursday evening and parked up not too far from the garage. However, the forecast for the weekend didn’t look too bad at all. 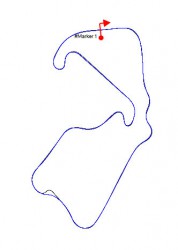 We were testing on a slightly different circuit from the race itself which was a pain. The test day was on the full GP circuit which includes Vale, which is a largely pointless corner. The race, though, was on the “Historic Grand Prix circuit” which is a complete misnomer as I’m pretty sure they’ve never run an F1 race on this circuit. All the same, this cuts out Vale and, as a consequence, has a much nicer flow of corners around the new pit complex. (Which, of course, we aren’t allowed to use as we’re spotty club racers.)

You can see the difference between the two circuits on the two track maps from the data logger here. Although, you do have to look pretty hard.

We only had three sessions on the test day and I had made a decision to take a slightly different tack in testing than I’d done for the rest of the year. Mainly because I seem to have gone backwards this year… Essentially, all year I’ve been chasing rear end grip as the car’s been oversteering just about everywhere. However, I was thinking, that perhaps I’d just accept the inevitable and make the front end worse. At least that way I might be able to get a bit of balance into the chassis.

So, the first session out on the test day was really trying to find out where the car was. Sure enough, it was over-steering all over the place. The FL in that session was 2:29.21, but perhaps I’d better quote the theoretical laps as there was a lot of traffic and getting a complete decent lap was nigh on impossible. So, that lap in that session was 2:26.40. If you look up the times from last year’s Birkett that doesn’t look too clever, but bear in mind that this is including Vale which actually slows the track down quite a lot. 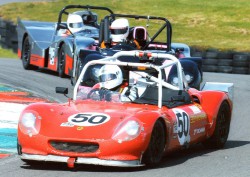 After that I’d got the tyre pressures sorted out and I started off down my notion of making the front end worse which I did by stiffening the front ARB. It has be said that in a lot of the photos of the car it does look as though it’s rolling quite a lot. This one here is from Anglesey earlier this year. (And yes, I do know the photo looks a bit, err, vivid but that’s because this didn’t come from a photo file directly from a scan of a photo in a scanner that isn’t intended for use as a photo scanner.) I’ve put a photo scanner on my Christmas list but I’m not sure Santa is listening at the moment.

But, as you can see there’s quite a lot of roll there. And, with the ARB duly stiffened I set off for session 2, although by now this was well after lunch. The car immediately felt better, I felt that I chuck it into the corners with much confidence than I’d had recently. The outright FL in that session was 2:24.97 so that’s a lot quicker but I think the track was a lot quicker by now. The theoretical lap in this session was 2:24.57 which is again a good deal quicker. What’s more, I’m sure I could have gone a lot quicker.

So, that was quite successful. I wonder why I hadn’t done this before. In the final session of the day I actually stiffened the front ARB as far as it’d go. Times in that session were 2:26.57 (2:25.28). So, that’s actually a bit slower but I’m not too sure whether that’s down to the suspension or not. All the same, at the end of that I was feeling quite pleased that perhaps I was getting on top of the car after all the trials and tribulations. 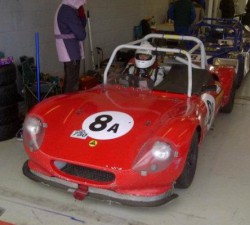 After all that, we got the garage sorted out for the Birkett which was the next day. As usual it was cold. It was, after all the last Saturday in October and that was the evening that the clocks were going to go backwards which is always my clue to feel depressed about the approach of winter with only the possibility of a skiing trip to lighten the gloom. I was first out in qualifying, on account of being car A. For some reason we sat in the assembly area for absolutely ages. When I got out everybody else had clearly decided to drive like an absolute pillock and there were cars all over the place, and spinning off all over the place too. As the result of this qualifying is irrelevant, the grid position  being determined by the handicappers, that all seemed a bit daft. I wasn’t too sure I was looking forward to the race after that. So, I just did the laps I needed (MSA rules say you need to do 3 laps to be allowed out onto the track) and came in before the carnage caught up with me.

The race got under way with Derek leading off. The car in the photo at the top of this post is Derek’s. That photo was taken at the end of the day with all the drivers and hangers on in the background; well, most of them anyway. I think I was third out so I spent about 30 mins sitting in the car waiting to be allowed out, but there in case I had to go out in a hurry. I had meant to bring my Kindle down with me to sit and read in the car but had managed to forget to take it to Silverstone.

I have to admit that I’d got some ever so slightly illegal tyres on the car. I’d bought to A048 softs for last year’s Birkett and had the cut as wet tyres. As by next year’s Birkett they were going to be too old I thought I’d try them even though it wasn’t actually wet. That turned out to be a bad idea…

Once out on the track I had a considerable degree of fun. Here’s some of the highlights of the  session. Pretty much the best bit was sneaking round the outside of the traffic at Brooklands to emerge in front of John Goodwin, which is around 12:40 in. The problem at the Birkett, though, is that a lot of other cars don’t actually see us. For evidence see the two comedy Porsches at 00:44 and 14:10. The latter one allowing John to get past me again. 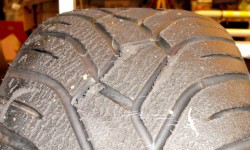 The notion of the soft tyres, though, turned out to be a bad idea as they overheated terribly and grained up. (Do I sound like an F1 poseur, moi?) All the same they  just didn’t work, as you can tell by the way I keep missing the apex by a country mile in the video. Here’s on the tyres, as you can see it’s all got rather hot there.

That’s all very well but the problem was that towards the end of the session the car suddenly starting missing, almost as if it was short of fuel, which it wasn’t. As such I came straight in. We couldn’t find anything wrong though even though we suspected things like the Dynojet IRC which have been perennial problem. So, eventually, we put it all back together and got ready to go out again. Times in session were 2:23.73 (theoretical 2:22.52); rather quicker because of the Vale cut-through.

So, later on I went out again. This time, though, I’d put the proper tyres back on and the car felt instantly more stable and the car was going fine. Problem is, about 20 minutes in and the same misfire/stuttering reappeared and I came in.

I ended up with no idea what was causing the problem. One possibility is that we noticed the fuel tank vent valve didn’t seem to be flowing properly. Certainly not letting air into the tank could screw up the car as eventually no air would get in and the fuel wouldn’t flow properly.So, I’ll sort that over the closed season but it’s hard to believe that that was really the problem. Times in this session were 2:23.09 (2:21.6) which is quicker again so that was pleasing.

So, that leaves us into the closed season. We had a slightly interesting start to the break as on the day after the Birkett we flew out to Hong Kong to spend a week with Tom. It was really nice to get away from gloomy England and go somewhere the weather was nice.

I am, though, left with a conundrum as to what to do over the closed season. I was intending to replace the rear end of the car, as I’ve discussed. But, on the way down to Heathrow Anthea and I spent some time talking about it and ended up thinking I’d do something different. In the meantime, though, I’m going to do some detailed stuff to the J15. Mind you, since then I’ve been so busy that I have, as of today, just got around to talking the car off the trailer. Watch this space to see what does actually happen.

5 thoughts on “And so to Silverstone again”