As good as my word, I fixed the central tub back together again. The photo here is of one side of the re-attached bodywork. Anthea commented that it actually looks quite good, and it could even be left like this. I don’t actually think that’s the case as when I paint the rest of the bodywork it’s bound to degrade. 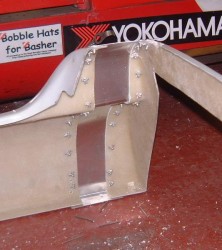 However, as I said, I reckon it’s going to be fairly easy to patch up the GRP on the inside as the aluminium makes a pretty good mould, as you can see in the next photo, especially with the addition of suitable release agents whether film or wax.

That all meant that I could fit the bodywork to the tub again and actually see if the steering column was going to fit or not.

With much faffing about I decided that I was going to have to shorten the lower column which actually turned out to be quite easy as I had some tubing of pretty much the right size to sleeve the Escort-sized lower column. 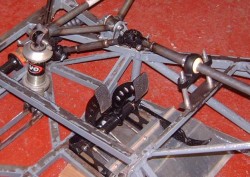 This photo is of the bottom end of the column once I’d done everything. You can see the sleeved lower column and  you could also see that I welded some little plates to the chassis to which to mount the bearings; note that I need some spacers to put the bearings in the right place. I’m still going to have to grind a little bit off the brake pedal pad, but only a small amount.

One issue about all this is that if I just assemble it as it it then I’ll end up being unable to remove the aluminium sleeves and bearings from the column. This is because they won’t fit over the welds that attach the spline at the bottom end of the column or the steering wheel attachment at the top of the column. I think I’ll just put up with that. I could grind the welds so that they’re not proud of the column tubing at all but that seems like a daft thing to do to what’s essentially a safety critical part of the car.

2 thoughts on “And stitching her back together again…”