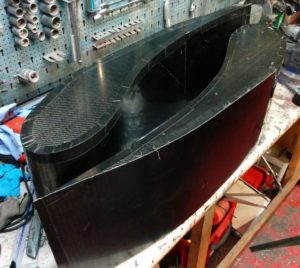 More random news from the Sabre t2a front as I get it closer to going racing. One thing that has happened is that I’ve signed up for the club’s pre-season trackday on Feb 24th so I’ve really got to get my act together now. More on that later, I hope. 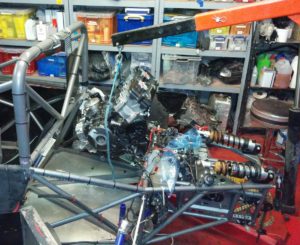 There’s a stack of stuff been done since the last post so I’m probably going to ramble on for quite a time in a rather disconnected fashion. So, here goes.

The engine is now back in the chassis, here it is being hoisted in and rotating around the rear top mount. It’s very easy to fit the engine to this chassis, it’s one of the best things about it. 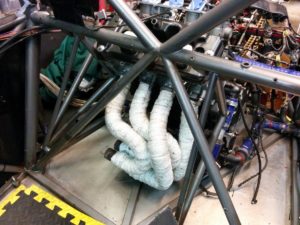 With the engine in I could really start getting the car back together. With the exhaust in I wrapped the headers. Last time I used some basalt tape which is supposedly better than glass fibre. However, it all fell off as usual so this time, because I had some on the shelf, I used glass fibre again. 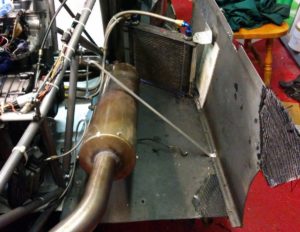 With the headers there I remounted the silencer, replacing the mount that got broken at the Birkett.

Note that in the photo here you can see the repair I made to the right hand side of the car and also the floor. The bodywork of the car is actually quite a patchwork now, after two crashes last year. Let’s hope that I make it through the next season without too much in the way of damage! 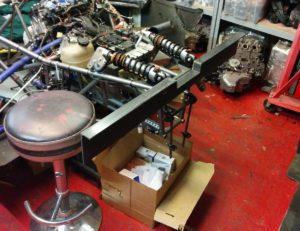 Something else that got damaged in the Birkett was the aluminium rear beam that supports the bodywork. I was always a bit distressed at the weight of this structure so one of the things I’ve done is to remake this beam in carbon. Here it is bolted to the back of  the chassis. Of course, as I made a mould for this (a rather grand term for a few bits of MDF) I could mould in the shape for the ARB drop links. 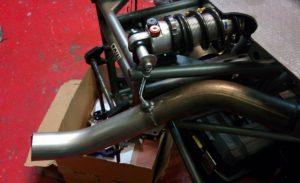 For ages I’ve had a problem in that  the exhaust pointed at the back end of the underfloor and got it far too hot. Hence, I’ve had a bit of aluminium riveted to the back end of the floor. Now, though, I’ve extended the tail pipe slightly. I needed to support the tailpipe though and I didn’t want to do that from the carbon. (Not sure why though really.) In any case I fabricated this arrangement to hold the tailpipe up. With that done I repacked the silencer and the exhaust was done. 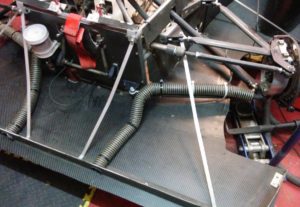 Next up is brake cooling. I’ve had a couple of issues in the past with fade on the front brakes. Admittedly usually just when the pads are very worn, and presumably pushing more heat into the fluid, but all the same adding in some ventilation seemed a good idea. So, I’ve added a couple of small holes just above the splitter and run some hoses along the wishbones to point at the discs. 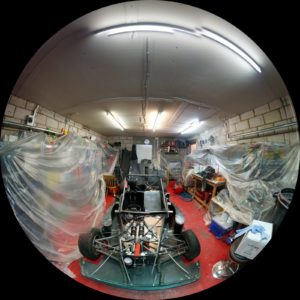 That was most of the actual changes to the mechanics, but I now needed to actually paint the car. Here it is, in the middle of the garage with a bunch of dust sheets around trying to keep the worst of the dust off all the stuff in the garage.

So, there’s the issue of colour. I wanted to do something different and was then musing about all sorts of things. At that point I discovered 7.5 litres of yellow paint sitting on the shelf that I was going to use on the Fury after it got set on fire many years ago. That made the decision for me, yellow it was! 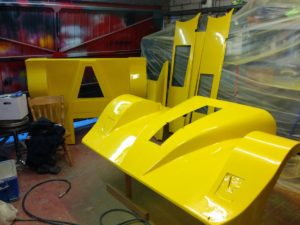 At that point there was two days of frenzied activity, with the car itself out in the weather, of priming and painting all the bits of bodywork.

After everything had dried, I put the whole car back together, added the race numbers and pushed it outside. 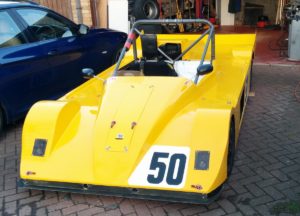 Next up, we head out on track again.