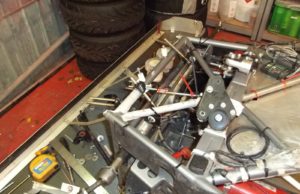 As discussed, I’ve been putting some time into the front anti roll bar.  I did think that I’d finally come up with an ideal way to engineer the front bar with the bar above the steering rack but I eventually had to abandon this as it was clear that it was never going to articulate properly. What’s more, the very short actuation levers that it required meant that the bar itself had to be alarmingly flimsy. 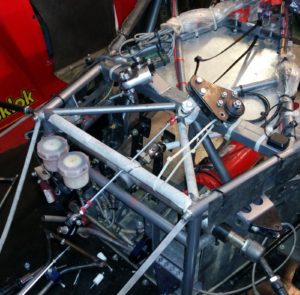 So, after even more thought, I seem to be spending all my time just looking at the thing, I decided to go back to a modified version of the ARB I used last year.  The photo shows a mockup of things with a lump of aluminium bolted to the bellcrank. I’ve now progressed to welding some new flanges on the side of the suspension bell cranks which allow me to articulate the drop links from a better place, allowing for more movement at the ARB and, hopefully, less conflict with the chassis.

You might notice that in the photo above there aren’t any dampers. Obviously, I took them off but I’ve actually sent them back to the nice people at Protech for a winter refurb. 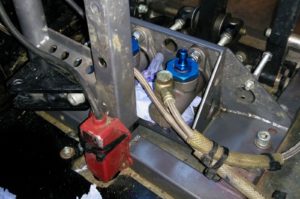 I’ve also decided to change the brake fluid reservoirs (as seen in the photo above) so that they don’t get in the way of the drop links. In retrospect it’s a rather daft thing to do, to produce a design for the ARBs that’s predicated on something that’s attached by a hose and easily moveable. The new reservoir that I’ve bought is an AP Racing one with dual outlets so it doesn’t take up as much space. It needs a push-on fluid adapter on the master cylinder though so I bought these snazzy devices. Note that they match the master cylinders, not surprising as they’re all AP Racing things now.

Of course, all this means that I need some new ARBs. Having spent ages calculating the springiness of bits of steel I’ve actually decided to make four ARBs of various stiffnesses. When I was an undergraduate they used to make electronics students, like me, do some mechanical engineering. At the time all that stress and strain stuff used to frustrate me as I wanted to spend more time with electrons. Odd that I now spend ages calculating the moment of inertia of a tube… 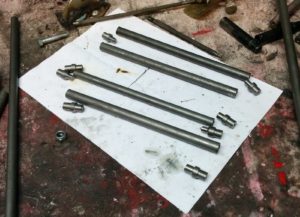 So, I’ve been hunched over my lathe making this collection of parts. This is a collection of four torsion bars and some little gadgets that will be welded into the ends to fit into the bearings in the car. You’re right, these should ideally be spring steel. However, it’s really hard to find any spring steel stock in suitable sizes. Especially if you want to buy less than 5 tonnes of it. So, I’m left with mild steel but experience is that that isn’t such a bad thing. Of course, if I learnt something about heat treating steel I could probably do something myself. 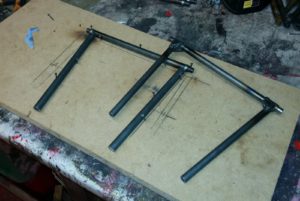 Finally, here’s a couple of ARBs. One completed, which is the spindliest of the litter, and one about to have its actuation levers welded on.

Once this is done, hopefully in the next few days, I’ll move on to replacing the cooling ducts on the car. I’ve finished making a big sheet of suitably bendy carbon fibre and I’ll start cutting that up and fitting it to the car.