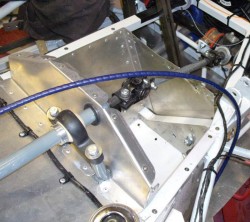 You may remember that I’ve all sorts of problems bleeding the J15’s brakes. Well, I finally decided that the pedal box I was using was designed incredibly poorly and had no chance of ever working properly. The only way to bleed the brakes would have been to take the master cylinders out and somehow arrange for them to be horizontal. Of course, in that position you can’t really pump on the pedal to get the air out. Although, to be fair, other techniques such as reverse bleeding are possible. However, getting the master cylinders horizontal was always going to be the core issue.

So, I’ve decided to do something rather radical, and perhaps foolhardy, and replace the pedal box. In particular for one that’s based on pendulum pedals rather than floor mounted ones. I’m not sure how I’m going to get on with that, time will tell. Of course, this is how Jeremy does the standard pedals but my 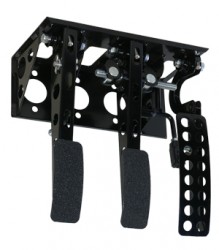 problem with those is that they’re not far enough forward in the chassis to fit my legs in. However, as I’ve since discovered, thereby hangs another problem.

So, I’ve bought another pedal box, one that looks like this photo. Supposedly this is a superior product but I have to admit that I’m not too convinced, in particular because the throttle pedal tends to move sideways rather a lot. As a consequence I’m not sure  how easy heeling and toeing will be. However, time will tell.

So, I’ve taken out the existing pedal box and hydraulics in their entireity; including the snazzy lid that Adrian made for it. 🙁

I’ve then constructed a housing for this new box, the final-ish 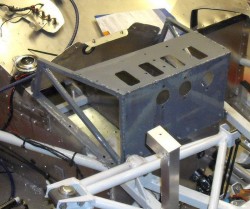 version of which is shown in the next photo. As you can see this is essentially a steel box to which the pedal box and the master cylinders will bolt. (And also the throttle cable. I’ve worked out how to do that but not effected it yet.)

As you might well be able to tell from the photo this is pretty much as far forward as I can get it. So much so that I’m going to have to get some shorter master cylinders. These are supposedly a superior product to the “standard” Girling format ones that I’ve got; although I got mine from Wilwood. Of course, they’re also twice the price. However, I need to use them as otherwise the front suspension bashes into the master cylinders.

I have to admit that I’m not sure that I’ve done any of this right and I can see me cutting it all off again over the winter. There’s two reasons for this. The first is that ideally the master cylinders would point backwards (I did think about making a new box using the components from the previous one albeit inverted) which would keep them out of the way of the suspension.

The other is that it’s a real pain getting the position of the box right so that it misses the steering column and so on. I have, I think, got it about 10mm too far to the left. The issue here, which is exacerbated by getting the pedals as far forwards as possible, is that they’re positioned askew in the car. That means that I should have skewed the pedal box slightly so that it “points” to me more directly. As it is the pedals appear to be a bit to the left. I don’t really know what this is going to feel like when driving it. At the moment I just really want to get the car going so I’m going to leave it as it is and perhaps go back to plan D, or is it F?, later on…

In the meantime I’ll see whether this actually works, at least I will when Parcelfarce deliver the master cylinders. You might note a certain frustration with this particular delivery agent; you’d be right…