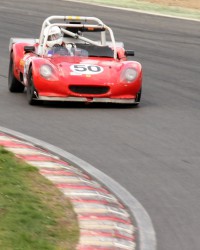 So, it was finally time for the first RGB race of the season and we headed off for the delights of Brands Hatch. Last year we’d had a spectacularly wet race here, followed by a dry one the next day. This year the weather didn’t look too good for the weekend either.

As usual, we went up on the Thursday evening and set up camp for the weekend. This time we were between Duncan, who’s a new RGBer, and Tony Gaunt. We were so close to Tony that he noticed us banging the side of the bus to make the window blind retract in the morning. (The vibration helps, you see.) Tony commented that we had the rebound damping set too high…

Out on track the day started absolutely chucking it down so I sat out a lot of the first session and only trundled out later on when it was clear there was going to be a bit of a dry line. Really all I managed to do was establish that the car was at least working.

I’d been looking at the data logs and decided that the way for me to go quicker at Brands hatch was to start braking rather a lot later in a couple of places; specifically into Paddock and  Druids. I was indeed working at this as the day went on. I can’t admit to thinking I was going particularly fast though. I’d been looking at some minor suspension tweaks but it was still too unstable through Clearways and Graham Hill to get a really good lap. I reckon I’m nearly a couple of seconds away from where I should be here.

At the end of the day I noticed that the brake lights weren’t working, which would mean a certain failure in scrutineering the following day. This is something that’s sort of half happened before, and then gone away before I’d managed to track it down. This time I persevered and it was eventually clear that there was dodgy connection somewhere. All the connections were fine, but there were presumably some high impedance connections to ground in the wiring. I resolved the issue, none too prettily, by completely wiring a new line from the power to the brake switch to the brake lights. At least that fixed it… I ended up working rather late on that, and didn’t really fix it until getting up early the following morning. 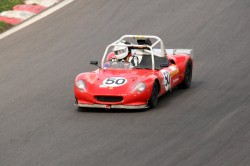 So, after getting up early and finishing off faffing around with the wiring, I signed on and it was time for the first race weekend of the year. One nice thing was that due to the very large level of RGB entrants the club had split the grid. So, not only did we have a race for each class we had the chance to watch the class F boys having fun.

I lined up moderately early for qualifying and made a rather poor fist of it really. I ended up with a best time of 52.8. This put me 13th on a grid of 21 cars which really wasn’t too wonderful. This is about 0.4 seconds slower than I managed in the Fury in 2010. At that time I was 9th on a grid of 29 cars. I was 2.9% slower than the pole man. This time I was 7.8% down on the pole time. I’ve’ got to work out what to do about this, of which more later I suspect. As it is I’m almost wasting my time…

So, the day passed pleasantly as the weather was good. however, as it got closer and closer to our race the clouds rolled in and, sure enough, as we assembled for our race it was absolutely chucking it down. As such the race was a bit of a lottery really. Mind you, it was clear that the chaps at the front were managing to actually generate some downforce and were in a completely different league from me. I ended up 11th with a best lap of 67.38 seconds. Matt, who won, had a best lap of 63.9… All the same, you can see the soggy video here if you want:

After that I retired to the paddock, covered the car up and went to the bar. Seemed the best response really… Oddly, the camera seemed to be able to see better than I could. I was aware that I was just heading for the biggest ball of spray I could see on account of the fact that that was where the cars were and therefore that’s where the track was…

The next morning looked dry and pleasant. I spent some time cleaning the car up; drying it off and trying to lose all the dirt  that seems to come hand in hand with the grotty weather. Later on it still looked good when we lined up for the race. I got a half decent start and spent a couple of laps just behind Colin and David. It was almost like the old class C days again. However, one lap when arriving at Druids I made a dreadful attempt at braking and I lost touch. What’s more, after that the brakes seems to get very soft with a very long pedal. It didn’t seem to respond to pumping up and down which seemed odd as normally when they fade you get somewhere with this. So, I just reconciled myself to a rubbish result, kept out of the way of the leaders as they went past and just got to the end. The best lap, though, was the fastest I’ve ever driven round Brands but it was on lap 4 before the brakes went awry.

I’ve since had the car in bits and I’ll tell you next time what I found. For now, you can see the video. It’s not exactly interesting though: