It was Brands time again. One of the best circuits on the calendar and a real challenge for a driver. Problem was, the weather forecast was pretty poor. I’d booked a half day testing on the Friday before the race and we went down on the Thursday evening and set up camp in the burgeoning RGB village in the middle of the outer paddock. On the Friday morning we seemed to be just about the only people there. The clouds were lowering above us threatening us with doom and despondancy.

Come the first session of the morning and the sun was out. As I’d put in new pads all round I wanted to spend a short while bedding them in. So, I wasted about half of the session doing that and then tried to wind it up. I’d also decided to change the damper settings as a bit of an experiment and that turned out to be a huge mistake as the car was nigh on undriveable. I spent a while taking off body panels and adjusting dampers and things improved slightly until the session finished. In all that time, though, I wasn’t really very quick. In fact, I’m still slower than my best time in the Fury which is a bit galling. The problem is that I’ve still not got the balance of the J15 right (I sound like Jenson Button, albeit without the talent). In some circuits, like Silverstone, that isn’t such an issue but at Brands it’s a killer as the circuit is essentially all corners. The best time in this first session was about 52.3 seconds. Pathetic as it’s still about .4 slower than my best Fury time. Although, as I said, the car was handling horribly so perhaps it isn’t too bad.

Back in the paddock I put the car back to the setup that it had at Silverstone. At least that was predictable.

And then it started raining. In  fact, it absolutely threw it down. If you’re reading this a couple of years hence it’s worthwhile pointing at that we’re in the middle of a drought, especially here in the south east. As usual when wet, the track was very difficult in the second session. This even after removing the bars and slacking the dampers all round. Best time in that session was 68.4 seconds!

And then it was lunchtime. I didn’t feel that I’d learnt much, other than how sensitive the car is to the rebound settings on the dampers. Even worse, the weather cleared and the three sessions in the afternoon, which I hadn’t paid for, were mostly warm and dry. At least I’d done some wet weather running as the forecast for the weekend was pretty grim.

So, I left the settings alone and went to bed. In the morning it did indeed look pretty grim and when we went out for qualifying it was tipping it down. Qualifying at Brands is always a bit of a lottery as the track gets really busy. I toiled around for a few laps trying to get some heat into the tyres and was getting somewhere at the end of the session when the car was starting to grip a little better. Problem was, at the end of the session I was getting silly numbers on the Palm. It was telling me I had an oil pressure of 190° and a pressure of 5psi, although the oil light wasn’t on. I stopped and got towed back to the paddock, although my money was on water getting in the electrics somehow.

Back in the paddock I had a good look round and couldn’t see anything wrong. I’ve been thinking for a while that I ought to replace the Palm dash with something that’s actually water proof and perhaps now there’s a drought I really ought to do so, something like a Dash-3 or a Dash-4. That would also mean that I wouldn’t have to be continually worrying about whether the Palm was charged or not.

Looking at the logs, though, it’s clear that it wasn’t just the display as the logs do also show something odd happening. What’s more, the point at which the oil temperature and pressure start doing odd things coincides with the battery potential dropping. Perhaps I’d turned on the headlights or something and that caused the instrumentation to go awry? I’ll have to check out the regulator/rectifier to see if it’s producing the proper output. I’ve also been thinking for a while that I ought to get a spare battery, perhaps this is now the time to do that.

I ended up with a best time of 67.5, good for a miserable 16th on the grid in the first race. I was 15th in the second race so that was very slightly better. About the only ray of sunshine is that I was quicker than Colin in both races. I must admit, I’d assumed that with his new BDN he’d be off down the road this year, but he seems to be having some difficulty getting the thing working.

Later in the day it was time for the first race. It was still really wet and by the time of the day that we were out the club announced that all races were being cut to 10 minutes. Not surprising really given the fact that other formulae were falling off left, right and centre.

So, I lined up on the left of the grid and when the lights went out was treated to the rather interesting sight  of Lee, in front of me, moving sideways. He’d lit the rear tyres up and, as the Brands grid is on a slope was just sliding sideways.

After that slightly alarming start I had a reasonable time of it for the first lap or so. Problem was, being in the thick of it, as I was, isn’t a recipe for being able to see where you’re going in the wet. Several times I literally couldn’t see a thing; something I’m not brave enough to handle well. I think as a consequence I missed my braking/turn-in for Surtees and ended up skittering across the grass. I came to a halt without any issue but then got going in what seemed pretty much like last place. Looking at the lap chart, though, I was only 26th out of 28…

After that I had quite a fun time, passing cars and working my way forward, although in 10 minutes I was never going to get anywhere. In the last couple of laps I saw Dan in front of me and was slowly gaining on him until I passed him in to Surtees (there was much more grip off  line on the bottom straight) and then, while rounding Clearways lost it again and this time spun right around and nerfed the left front on the pitwall in the process of coming to rest facing completely the wrong way. My camera wasn’t working well; I’d tried to improve the wet weather vision by putting some cling film over the front of it, turns out that the optical properties of cling film are not what you need. But, if you watch Dan’s video then you can see me making an idiot of myself in his video.

I then made the mistake of my life by moving forwards a bit (that is, backwards along the track) so that I was opposite one of the holes in the fencing at the top of the pitwall. That meant I could climb over the cage and onto the pitwall. Why was that a mistake? Because it was the last lap of the race and I could have reversed over the finishing line and got an extra point. I’d surely also get RGB style points for crossing the line going backwards. Probably also a talking to from the clerk of course…

What I actually did was to kill the engine, there was some steam around the front and I was concerned about the radiator having been holed. That meant another trip back to the paddock, this time on low loader. 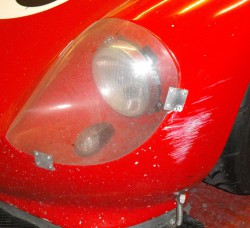 Back in the paddock it didn’t look too bad really, although the bonnet had a bit of a graze, as in the photo. The bodywork doesn’t fit as well as it used to either. I probably need to bash the mountings back into position. Note, by the way, that the headlamp covers are really grubby on the inside. I keep wondering about getting rid of the mounting plates (those little bits of aluminium) and just holding them in place with tape as that would also mean, I think, that they wouldn’t get water inside them.

I was still a bit concerned about the radiator though, and after a very wet evening and night I had a good look at things and checked everything over. Although there is a bit of a dinge in the rad it wasn’t leaking. So, everything was set for race 2. All we needed was for the rain to disappear.

And then, amazingly enough, it did! I lined up on the grid in what seemed like sunshine. A trip round on the green flag lap, though, showed that although the track was mostly dry there was a river across the track on the exit of Clearways.

At the start I got away pretty well and was in a group with Lee, Austin and Steve Bell. Those three people were scrapping away and I was checking that the car really was going all right. After a lap or so Steve ran wide out of paddock and I managed to get up the inside into Druids. I’m slightly concerned (see the video) that I chopped him into Graham Hill but he didn’t complain later! Then Austin ran wide on the exit of Clearways, probably having a bit of a moment on the river, and I got past him. After that it was really just a drive to the flag.

Just about at the end of the race John Goodwin, a returning RGBer in a newly built Spire, came zooming past. Hard to see how he managed to be so much quicker than me. I’ve been thinking about the handling of a car a lot recently and it’s clear that I need to do a lot more to stick the rear end down so as to get some grip coming out of places like Clearways. (Or perhaps I just need to grow a larger pair.) I think I’ll go testing before the next race at Cadwell and try a few things on the rear suspension; softer springs and different damper settings come to mind.

Anyway, here’s the video of the race. It’s quite good for a few laps and then gets boring. Worst of all I got lapped! This is something that hasn’t happened to me for ages and brings home how far the chaps at the front of the grid have jumped forward.

I’ve actually started doing a few things to the car since the race, I’ll leave those for the next spine-tingling update though. Watch this space…

2 thoughts on “Boating at Brands”