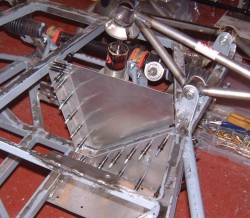 This is boring, really it is. I’ve got to that bit where I’m making the panels for the chassis. I haven’t sorted out the powder coating yet so I can’t actually rivet anything together but I am nonetheless making the panels.

The photo on the right is of the footwell area. The reason for the odd arrangement of two panels is that I need to provide enough space for the pedals to go into at maximum angle of dangle. As you can see, I’m using lots of Klekos too. If you’re planning on doing anything with aluminium panels, then go and buy a bunch, they’re fantastically useful. What’s more, they’re cheap 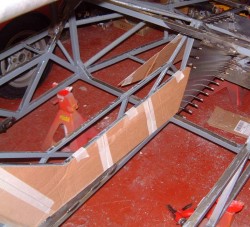 enough these days, they used to wallet-bursting. As you can perhaps tell, I bought a load of new ones, in readiness for this build, a while ago.

I make these panels, by the way, by first making cardboard templates, as in the second photo. It’s much easier to make a template as you can extend it when you cut it a bit small, and shove it past obstacles. Once made it’s relatively easy to cut a bit of aluminium to size.

Up to now I’ve made most of the panels around the driver, although I need to do the seat back and the bit on top of the footwell. The former is a bit tricky because I really need to make that panel removable so that I can get access to the exhaust side of the engine. The top of the footwell is also a bit tricky because I’ll need to make some sort of frame that sticks up above the chassis for my toes to protrude into. (And, as I write that, I’m wondering if some of this should be in steel…) What’s more, the steering column needs to thread its way through some how. 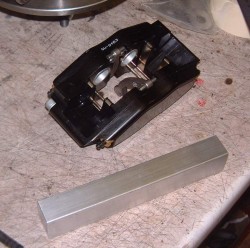 As I got so bored, I decided on a bit of light relief and to press on with the rear brakes. As I discussed a while ago I bought some of the same discs as I use on the rear of the Fury from Rally Design. I also bought some aluminium blocks to make some mountings for the radial mounting calipers. The photo here shows one of the calipers and one of the blocks. This is just a lump of aluminium of a size that’s in the right region for making a mounting.

In an ideal world, one would use a milling machine to do the right thing to this block, but I don’t have one of those. 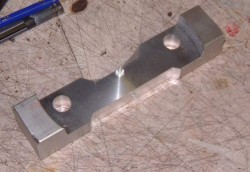 However, I do have a lathe and I thought I’d worked out how I could use that to do a suitable job. And, after a goodly portion of time hunched over the lathe collecting aluminium chips in my hair I ended up with this.

This bolts onto the upright using the mechanism I discussed a while ago in that I tapped the upright to M12x1.5 (that’s normal wheel stud size) in the manner shown in the next photo. 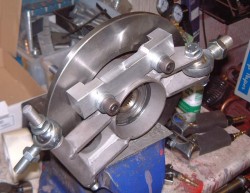 The one obvious thing missing here, apart from the caliper, is a couple of h0les drilled and tapped from the top of the block, as shown here, for mounting the calipers. I’ll probably sort that after I get back on the panelling grind…