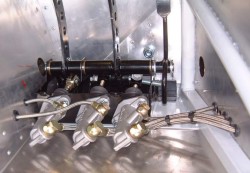 I’ve been pressing on, although I don’t seem to be making sufficient progress to make me feel comfortable. Still, some things are happening. I have, though, managed to completely finish the hydraulic side of the braking.

So, here’s a nice shiny picture of the final arrangement of the master cylinders, lurking at the bottom of the footwell.

There’s doesn’t seem to be much point actually putting any fluid in the brakes at the moment though, so I’ll leave that for a while. For all I know, I’ll find something that conflicts with one of the brake pipe runs at some point, meaning I’ve got to change the lines and I hate getting brake fluid on my hands. 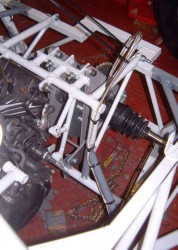 As I was doing the hydraulics I ran the line to the rear for the clutch slave cylinder. I haven’t fitted the slave cylinder yet though. So, for the time being, I’ll just leave the line tie-wrapped up in position, as in the photo.

I still wasn’t too sure of the steering column positioning. I seem to have moved it around a lot and never been completely happy with it. However, this time I was determined to finish the job. Luckily, I think I’ve finally managed to do this. This time I’ve ended up using a completely (Escort) standard lower column and I’ve moved up the lower bearing mountings a bit more. This was getting a bit hard to do with spacers so I machined some bushes and welded them into a couple of bits of tubing that I welded to the chassis. (I know, I know…) 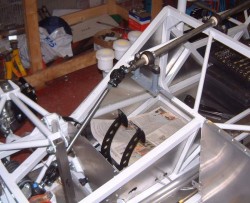 You can see all of these bits in the photo on the right. I really think that this is it for the column.

Mind you, there was one final thing to check in that I’ve moved up the column a bit more and there was always a chance that it was going to bash into the underside of the front bodywork. (Just what do you call the front bit of the bodywork on a mid-engined car? “Bonnet” seems wrong somehow. The rear bit is clearly the engine cover. Hmmm.) 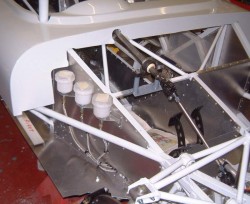 So, I refitted the central tub and tried the front bodywork on for size again. The first problem was that front of the tub bashed in the fluid reservoirs as it was being lowered into position. This is because the roll cage requires that the rear part of the tub is put in position first and the whole thing “hinged” about the rear of the tub. Still, that wasn’t too big a deal with the help of a jigsaw. More dust in the garage though…

I said that I’d done all of the hydraulic parts of the braking, and that I have. However, that doesn’t mean that the 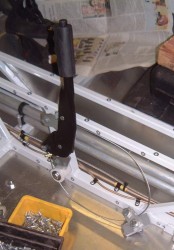 handbrake is done yet. So, I then spent ages fitting the handbrake lever to the chassis, as in the photo on the right.

This might look a bit confusing as there’s a loop of cable. This is because the Wilwood calipers are a bit lacking in mechanical advantage for the handbrake so this arrangment gives a 2:1 mechanical advantage to the handbrake, at the cost of double the lever travel which means that you have to be a bit careful to adjust the cables so that there’s only a little slack in them. Experience from the Fury shows that that isn’t a problem though. As you might be able to tell from the photo, the cable comes out of the lever heading straight down. So, I machined a bit round lump of Delrin to run the cable around and bolted that in below the lever. 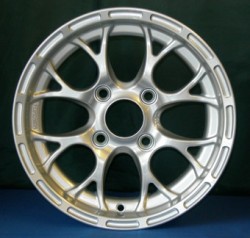 At the right side you can see the compensator that will be attached to the two cables to the rear brakes. I haven’t actually made those cables yet because I’m not completely sure how the cables will attach to the calipers. On the ones on the Fury I had to modify the levers on the calipers so that they didn’t bash into the inside of the wheels. However, I don’t know yet whether that’s going to happen on this car as I don’t yet have the wheels. I have ordered them though, Compomotive CXRs like the ones I’ve got on the Fury and as in the photo on the left. They haven’t arrived yet though. Until they do, I’ll hang fire on finishing the handbrake.

That’s all the J15 stuff. It may have escaped your notice, as you’re probably not as obsessive as I am, that the racing season is coming up full tilt on us. As it’s clear that the J15 isn’t going to be ready for the first race[s] of the season, I spent a while at the end of today just checking that the Fury still worked. I’ve got some more to do to it though before actually racing it. I wonder how you do it?