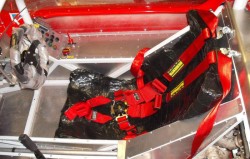 Well, the car’s nearly finished. But, of course, there’s still loads of things to do! First up this time is fitting the harness. This required lots of stuff to be cut out of the seat to allow room for the straps but it fits pretty well now.

This is another Schroth harness, as I really like them. It’s a bit different, though, as it’s a HANS specific harness. This means that the bit of the shoulder straps that goes over the HANS is actually only 50mm wide rather than the 75mm of the old harness. What’s more, the lap straps are also 50mm; Schroth now say that this are safer because they tend to sit in the right place across your pelvis. Dunno about that, but I do know that 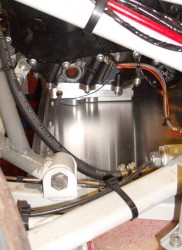 the new belts are much easier to adjust than the old ones, because they’ve got this natty gadget that makes pulling on things easier.

But, as you can see, they’re a bit long. So, I’ve had to fold up the excess. If I was brave I’d cut it off, but perhaps I shouldn’t.

Next up was something I’d been putting off for ages, which was making a rear undertray. Here’s one shot of it, where you can see that it just clears the bottom of the engine.

I attached the undertrays on the Fury with Dzus fasteners. This wasn’t as clever as I’d thought as it turned out they didn’t really support the trays sufficiently; I ended up using some tiewraps as well. So, this time I’ve just used some little M5 bolts. Time will tell if this is just too tedious. What I might do is put a hatch in the undertray, just where the oil drain 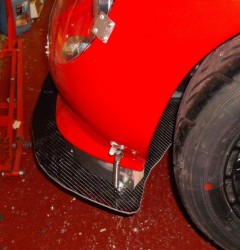 plug is. Haven’t done it yet though.

For a while I’ve been meaning to add a couple more springs to the front of the car, to make sure the splitter is properly supported. Although, to be honest, the CF splitter is much better than the plywood one was so hopefully this is unnecessary. I really must make another splitter for when I munge this one…

I realised just as I was selling the Fury that I’d forgotten to get a new Power Commander for the J15. So, I ordered one from those nice people at Demon Tweeks (not as outlandishly expensive as many people say, especially with the discount that I get). I then set about fitting it to the 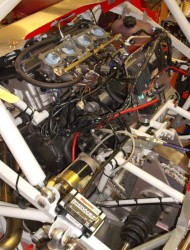 car. While I was there I did something I’ve been meaning to do for a while which is the bung up the superfluous vacuum ports on the engine. I think this might have made the engine run rather sweeter although it hasn’t helped the maze of pipes and wires one bit.

While looking at the engine I also fitted the catch tank that I’ve had in my “fit these to the car” box for ages. This is down on the floor, just about, behind the passenger seat. I know from past experience though that nothing will ever go in here. Unless, of course, the engine dies horribly in which case it will be nothing like big enough. Still, the scrutes like them.

After that I wanted to look at the dash. If you remember I’d had some problems fitting the dash in with the screen and various other bits and I said I’d been thinking about moving the Palm to the side slightly. (Although, as last year, I’ve also been thinking about buying a Dash-3, although many people still seem to be having problems with them.) 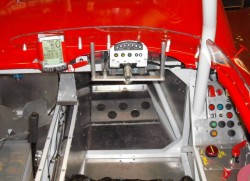 In the meantime, though, I decided to do what I’d said so I cut down the existing dash. This meant, as it was narrower that I could move it towards me slightly which meant it wasn’t so close to the screen.

The only fly in this particular ointment is that the LEDs I chose to use for the oil pressure warning are pretty brights ones. The dash now seems to positioned in such a way that they’re pointing straight at my eyes and are incredibly dazzling. It could be different in the sunlight, of course. But, after an hour with spots dancing in front of my vision I might put some tape over them.

As you can see in the photo I’ve also made a little mounting place for the Palm. This is quite neat actually and does make a number of things easier to work with, especially the buttons which I do occasionally have to prod.

The next job, and possibly the last one that actually involves making something, is to fabricate some sort of inlet for the engine. I’ve been musing about how to do this for ages now. In an ideal world I’d make some sort of airscoop using a carefully crafted mould which I’d lovingly rubbed down over days of work to a super glossy finish. However, that isn’t going to happen in the short term. So, what I’m looking at at the moment is just ducting 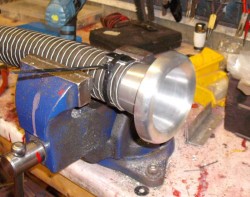 some snazzy turned aluminium ducts that I’ve got into the intakes on the top of the airbox. I’ve even got some ducting of the right size. However, what I haven’t got, at the moment, is any way of easily attaching the ducts to the airbox. And, of course, making the air whizz down a 65mm duct may not help the amount that gets into the engine. So, I’ll probably have to do some experimenting. I did wonder if I could use a spare MAP sensor to log the pressure inside the airbox…

One thought is that two separate ducts into the airbox isn’t that dissimilar to the arrangement on the ‘bike itself. So, perhaps that isn’t such a daft idea.

My current thoughts centre on getting some sort of flange in the airbox that I can clamp/bond an inlet duct to. I might have an idea or two. So, some thought needed. In the meantime, I constructed a small experiment to see if I could bond the ducting to a lump of polypropylene, of which the airbox is made, as in the photo. That’s one of the inlet ducts that I’ve got that’s included for added artistic impression…