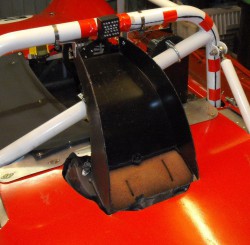 Well, hardly that to be honest. Dawdling would be closer to the truth.

After Brands one of the immediately obvious issues was that the airbox had fallen apart. The top panel had been completely ripped off which is slightly alarming. I think I might have precipitated this; at some point before the Brands race I was doing something around the head restraint area and managed to nut the airbox rather firmly. Although leaving me rather dizzy I did recall an ominous cracking sound. At that point I found that the aluminium support brackets at the top of the ‘box had fatigued into two parts, which I put down to making them in 1mm sheet so I remade them with 2mm sheet. However, perhaps I fatally wounded the airbox at the same time, as well as nigh on fatally wounding me.

Of course, one issue is whether there was any drop off in performance as a consequence of this. This is made rather hard by not knowing when the lid came off; it could even have been after the race finished of course. Much poring over logs ensued. It was clearly there for a good time in the race because you can see that when I passed Austen on lap 5 of 16 it was still in place as you can see it on his video. I can almost 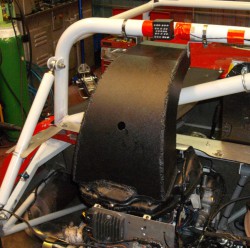 convince myself that there’s a very slight reduction in power for the last c0uple of race laps, but that could easily be me getting knackered.

All the same, I’ve remade it all, albeit in much the same manner as before. What you can’t see on the photo is that I’ve added a couple of big tiewraps around the whole thing. That’s bound to make it better.

The other issue that’s still obvious on looking at the logs and the videos, is that I’m still struggling to get the balance right. Hence I’ve reduced the rear spring rates slightly and will try running it next time out with the rear ARB disconnected. I might also try increasing the bump settings on the front dampers.

Inevitably, there was another issue at Brands in that water got into the Palm display (it’s definitely not designed to be in a race car environment). Hence, I’ve splashed out a lot (!) of money on one of Race Technology’s Dash 4 displays. I’ve had a fun time configuring this for what I want to see. Of course, I don’t 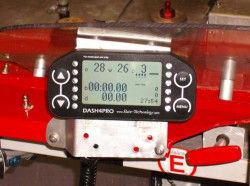 have a clue as to whether this is actually going to work. A few of other people have had trouble getting some of the information on these displays to work well.

One thing on the new display is the lap delta display, that’s the number at the bottom left. So, when you hear David Coulthard going on interminably on the F1 coverage on the TV about a driver’s lap delta displays you can now comfort yourself that I’ve got one too. Might not work though.

The display looks kind of odd on the mounting that was really intended for a Palm. However, it seems to be suitably visible. Let’s wait until I actually get out on circuit.