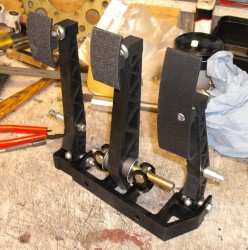 So, it’s been a bit quiet hereabouts, but I have been getting on with things slowly. I’m now just about at the point where I need to get the chassis powder coated. So, this is a bit of a catch up post. One thing that is worth mentioning is that I’ve decided to skip this year’s Birkett race so as to get properly prepared for next year’s race season. I’m also in the process of losing my responsibilities as RGB formula rep which should mean I can concentrate on just racing for a change; which will be nice…

As a bit of catching up on a previous post, Nick at AB Performance managed to get the recalcitrant bearing cup out of my diff, with the aid of a 30 tonne press! I’m just hoping that the diff itself is OK. 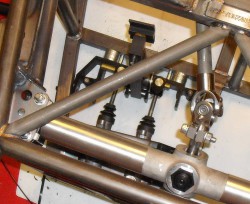 As for the car itself. the biggest thing I wanted to do was to get the controls in the right place, something that’d suit a driver who has gorilla-like arms and legs. One of those aspects is the pedals, seen at the top of the page. I’ve positioned these in the chassis about 20mm forward of the standard position. After much experimentation, using the old J15 seat, this seems to be right. They’re in the chassis in the photo on the left, with a stack of penny washers simulating a 20mm spacer that I’ll have to make later.

I’ve also modified the master cylinder mount, which you can just see peeping in at the bottom, to move the cylinder forwards as well. Luckily, I can use the old AP racing cylinders from the J15 as they were especially bought to be shorter (and much more expensive) than the normal Girling-type. 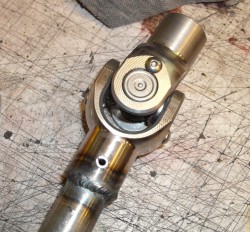 Next up was the steering. I’ve done the fabrication necessary to put the steering in the right place. I’ve done this by moving the upper column mount forward from the standard position. I did consider completely remaking the upper column using Igus bearings but decided not to. As is my standard practice, the welding in this area, such as the UJ on the column as shown in the photo on the right, is augmented with a roll pin inserted through the whole thing. Belt and braces, natch.

With that done, the entire steering and pedal systems are done, in time to be taken apart 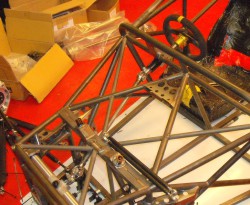 again. You can see the whole column in the next photo on the left, which is not one of my best… As you can see, I’m using an old steering wheel. In this case it’s the rather second hand one that was in the Fury fire many years ago. I wouldn’t want to use it in anger but it’s fine for this purpose.

I spent a while putting together all four corners of the car. These won’t have to be taken apart again so I can do it all properly. You can see one of the rears in the next photo. You can tell it’s the rear because of the fixed-length toe link, apart from that the front and rear  are 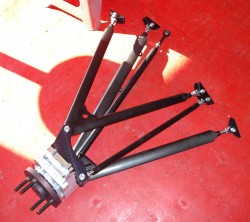 very similar, although different in detail.

I have actually bolted a couple of these corners onto the car. (In fact, this is one of the reasons for the tardy post as in the process of doing that I damaged my back and had to retire hurt for a while. Serves me right for what I was doing, to be honest. As I was doing it a small voice in my head was saying that I ought to get some additional support because I could hurt my back leaning over the car with one of the corners held in one hand. And then I did…

I’ve been debating for some time how I was going to do the Sabre gearchange. I always intended to build a paddle shift again. There’s a bit of move against them in RGB but I 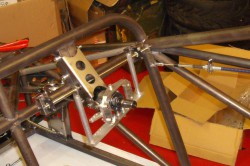 think it’s based on erroneous thinking and I’m sticking with it. However, what I hate is the push-pull cables that seem to go with the installation of a rear engine, especially when those cables have to turn through 180°. So, I’ve decided to use two transfer shafts. One behind the steering wheel and one behind the engine. That’ll allow me to keep the push-pull cable pretty straight. The photo here shows the shaft for the former, which you’ll notice entertainingly uses a specially cut hole in the steering column mount… Note that the stainless steel transfer shaft rotates in a couple of small Igus bearings, the same arrangement that I’ll use behind the engine.

You can also see the “paddles” here (stolen from the J15) and the place where the push pull cable will go. Although, since this photo was taken, I’ve modified the way I did the hard point for the cable because I decided I didn’t like what I’d done here. 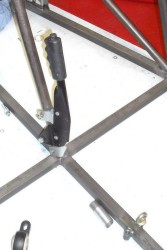 The final control for now is the handbrake. I’ve decided to mount this on the side of the central chassis upright and I’ve turned and welded a couple of threaded bushes in place for this. (Although, in the photo, the bolts are loose.) I was wondering what to use for the handbrake cable hard points but then realised that I could press the passenger side seatbelt mount into use for that. So, when I build the car up I’ll make some sort of bracket for that. 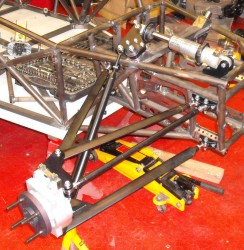 Finally, for now, I’ve been checking the suspension articulation using the dampers I robbed from the J15. Here’s the rear corner I mentioned before as causing a medical incident. The tricky thing about this is that Andy usually uses 1.9″ dampers and mine are 2.25″. However, I reckon I can press these into service and consequently save about £1000 on the cost of the complete build. I do wonder, though, whether I ought to get Protech to rebuild the dampers for me. In fact, thinking about it, I think it’s a no-brainer. I’ll phone them soon.

So, the next thing is to take all this apart and get the chassis powder coated. Watch this space…