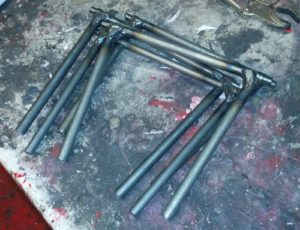 I finished making all the ARBs, here they are. I must admit I woke up one morning worrying that the ARB was going to bash in to the front bodywork so I got the bodywork in from the cold and tried it. 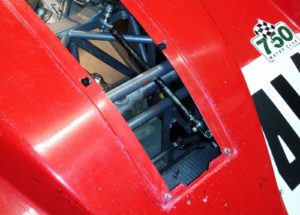 Luckily, (not really, because I had checked, I just had cold feet) it was OK and I could get onto the next thing.

This was replacing the panel of the front end of the chassis which was always a bit of a mess as it was an afterthought. I hunted in the carbon fibre pile and found a suitable offcut. That I have 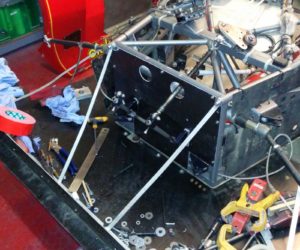 carbon fibre offcuts these days is a thing to marvel at. I found a suitable lump of CF and after the usual performance with templates (I also have a pile of cardboard for making templates from) I cut it out and fixed it to the front of the chassis. To be honest, it’s mostly held on by the ARB mounts. As you will notice I had to cut a couple of large holes in the panel for the ARB drop links. 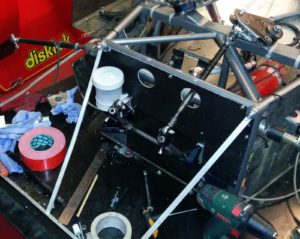 Then, if you will remember, I’d discarded the old brake fluid reservoirs as it was a horrible design and they got in the way of the ARB. I’ve bought a new AP racing reservoir which was fixed to the CF plate (all of a sudden there’s lots of places to mount things). What’s more, as the plate is there I drilled some holes for hoses to he master cylinders which could be sealed up with nice grommets so the scrutineers won’t moan about getting flaming brake fluid all over my legs. 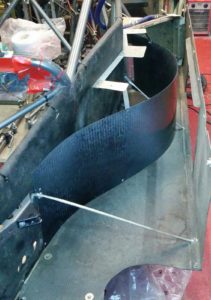 Lastly for this post, I cut up some of the flexible carbon fibre a made a while ago and remade the ducting in the left hand sidepod. The idea is to make the duct a slightly different shape and, because it’s carbon, I’ve saved a bit of weight as well.

Next, of course, I’ve got to do the same thing on the other side of the car albeit for the oil radiator. That’s just tedious, and an example of something my daughter calls the “second sock syndrome”.