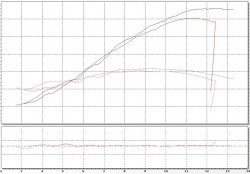 Rather amazingly, I seem to have reached the end of the winter mods and reconstruction of the car. I’ve done all the suspension setup, although as usual I might do it again. I’ve also done the corner weighting.

So, all that’s left before the start of the season is to test the thing.I did drive it from the garage onto the drive again which worked. I then used the reverse to get back into the garage, which didn’t work. However, I’ve now fixed that. (Some dozy pillock had wired the motor wrongly.)

To get myself finally set up I trudged up to Harrogate today to get the car dynoed. This is the same place I took the J15 in its earlier CBR1000RR07 incarnation so, even though the actual numbers from the dyno are not relevant, the comparisons are.

Hence the plots at the top right. This shows the data for the current car and the best run from the ’07 engine last year. As you can tell, there’s about a 10% improvement in the power output. What’s more, the ’08 engine carries on going rather better. In fact, the power curve is pretty flat from 11,500 upwards. Obviously, the ’08 engine’s rev limit is rather higher than the ’07 one. In fact, it was essentially a rather boring day, as commented on by Damien (the dyno chap). he reckoned that was essentially a good sign; it just worked with no excitement.

With  that out of the way I’ve got a few little things to do but, essentially they’re peripheral. For example, I want to check my helmet visors and locate my nomex undies… In fact, I’ve decided to just leave the car on the trailer…

The first race is at Silverstone towards the end of this month. Before then I’ve got a couple of test/track days to do. I’m getting really quite excited now… 🙂 I’ll tell you how I get on; there might even be some video.