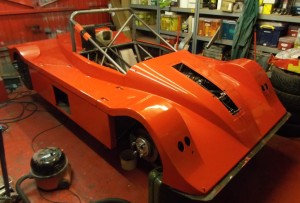 It’s getting awfully close to the new season now, and I’m getting more ready but I’m still not there yet. In particular, I’ve done no testing or anything which is not something that can be said for much of the rest of the grid… Oh well.I’m afraid I went for the boring but reliable all red paintwork. I am, though, considering putting some little yellow lines around it but I don’t want to make it look too pernickety. 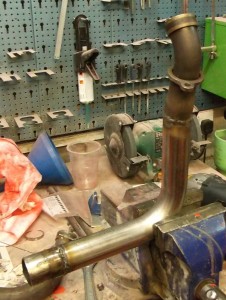 All the same it’s a relief that’s done as it’s spread pink dust all over the house, much to Anthea’s annoyance.

You’ll remember that I had to replace the #1 header on the engine after the one on Andy’s manufactured exhaust fell to bits in the Birkett. On examination it wasn’t really the right length either. So, I butchered the system I made for the J15 and produced this new pipe. The one was originally made by starting with a complete Honda exhaust and I must admit that I’m much happier with the way this attaches to the engine. The curve you can see at the top of the pipe is completely original Honda.

With that done I could re-assemble the exhaust system and do something that I’m not really that sure about. In particular I wrapped the headers 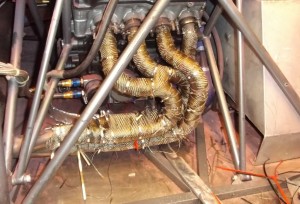 as in the photo here, which was taken part way through the process.

I must admit that I’m not completely sure about doing this. I would like to reduce the temperatures in this part of the car but I don’t like the way that exhaust wrap just gets in the way and seems to just fall off after a while. This time, though, I’ve used some basalt wrap which will perhaps work better. Perhaps I ought to just admit defeat and Cermachrome the pipes… 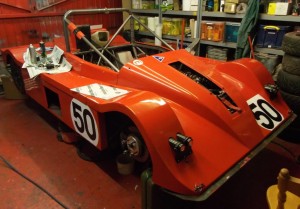 I’ve also done that job that really presages the new season and added some race numbers. I’m number 50 again this year. I’ve done a couple of things since this photo as well. In particular I’ve sprayed the air inlet black, which is a big improvement in the look of that part of the car and made a cover for the front suspension. Once I’ve sprayed that red as well you can tell me what you think. 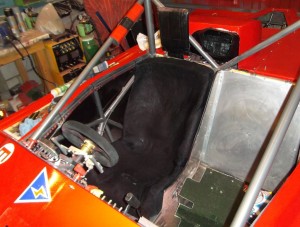 Finally for today, I’ve recovered the seat. The scrutineers have developed an obsession with the fire aspects of gaffer tape on seats. As the aforesaid tape is firmly sandwiched between me and the seat I’m not sure that that’s an issue but, ever helpful, I’ve stuck some proper race seat covering onto the seat. Anthea reckons it looks more comfy but I’m not so sure. I am worried about the glue loosening and the cover moving around but time will tell on that front.