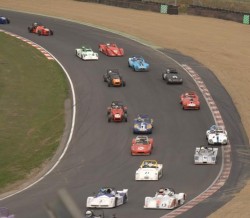 Forgive me, it’s been ages since my last post. I have no decent excuse other than worrying about a PhD thesis to write… I haven’t actually written it you understand, just worried about it.

Anyway, what have I been up to? I think I’m catching up here so there will probably be some rambling. First up is that I did some modifications to the pedals after the initial tests which seemed to have worked out fairly well. One aspect of this was widening the throttle

pedal a bit, as in the photo. This is a bit tedious really, this is an OBP pedal box, something I shall not ever be buying again. Why not? Well, this “race” box is far too flimsy and I’ve had to beef up several things to make it race-worthy. For example, if you look at the top of the photo there some small bolts that go through the top part of the pedal. This is because without these the whole pedal bends laterally. Secondly, you’re expected to heel and toe in a race car.  I’ve already cut off the pedal once and re-welded it towards the left and adding this extra panel, as you can see in the photo, is the latest attempt at getting the throttle and brake close enough together.

Next time, if there is a next time, I shall just make my own from the start.

Next up is the clutch pedal. I started remember all the problems that I’d had getting the Fury off the line. There I resolved things to some extent by changing the lever ratio slightly. I’ve done the same here by the 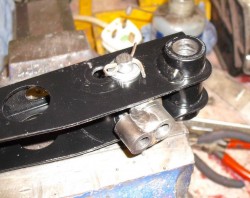 contrivance you can see in the next photo. This is essentially a modified pivot point for the clutch by welding a small, home-made, bush onto the side of the clevis. (Although, as I write this, I’m wondering why I’m not using a small female rod-end to take account of flex and general shonkyness of the pedal box. (See above.)

It was race time again this weekend, that’s a shot from race 2 at the top, just after the start. If you look you can see both me (car 50) and my old Fury (car 24) in there! I didn’t do that well at the weekend, but I’ve realised since that I have a good excuse… What was good, though, was that I got two pretty good starts which is a pleasing difference from my previous existence. 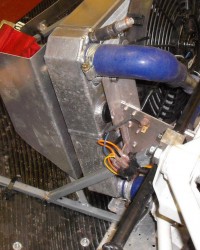 Back though, to pre-race things.

I think I mentioned that I’d noticed some coolant leaking. I finally traced this (well, to be fair, it was really John who fettles Derek’s car who worked it out) to the bung in the radiator that plugs up where a fan switch could got, the black thing in the middle of the photo. John worked out that the coolant that I’d been thinking came from the bottom hose connection was really running down from this bung which, of course, I’m sure that I tightened up properly in the garage. All the same, I did it up with some pump pliers and the car now seems to be coolant tight which is quite a relief. 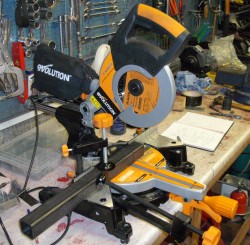 For a change, here’s a bit of tool-porn. This is  Rage Evolution saw and is my latest toy. I’m a firm believer, you see, in the “he who dies with the most tools wins” philosophy. This thing is just a circular saw which chops and slides and can be used at various funky angles. Best of all, the blade is a TCT (tungsten carbide tipped) device that means it can cut steel as well as wood. In the saw in the photo is a length of 40mm steel box with 3mm walls. It just cuts straight through this which is great because in the past I’ve had to use a hacksaw and then, if I really wanted it to be square either struggle for ages with a file or use the lathe. Now it just cuts. About the only thing that isn’t any good is that bag on the top in  which your cutting swarf and dust is supposed to be deposited. This is not true. What happens is that everything gets liberally thrown around the garage and nothing, 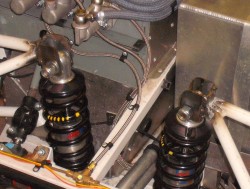 absolutely nothing, goes in the bag. Oh well, it’s a small price to pay.

So, why am I chopping up 40mm/3mm box section? Well, it’s to get some droop travel in the front suspension as discussed here before. What I did was to use some of the box section to make a slightly lower mounting point for the top of the dampers in the rocker arms. Initial indications are that the suspension travel is rather better now than it was.

That was the condition that we set off for Brands in. I’m going to summarise what happened for reasons that will become clear in a moment.

I did  the test day, which was OK and my times around Brands (not my strongest circuit, to be honest) were just about where they were in the Fury. However, it’s clear that I could go faster because the car is just not accelerating as fast as the Fury did even though it’s only a little heavier. For example on a typical pair of laps I’m losing 2-3mph compared to the Fury even though the gearing on the J15 is slightly shorter. At the moment, I’m guessing that this is because I haven’t had the engine mapped with the current exhaust and inlet. So, I’ve arranged a trip to a rolling road chap to see about that. I hope to be able to do a few different runs with different configurations of inlet to see what works and what doesn’t.

One problem, though, is that the spoiler is probaby introducing a fair bit of drag. So, I’m going to re-design that somewhat; you’ll have to wait and see how. It’s also the case, though, that I need to lower the rear of the car somewhat. I started off assuming that I’d have to run the same of sort rake as I did in the Fury, about 25mm or so. However, it’s becoming increasingly obvious that really the car needs to be flat or possibly even lower at the rear than at the front. The problem is that I can’t really do this at the moment because I’m running out of travel on the rear dampers. That is, I’m going to have to change the damper mounts again. Sigh. I hope that this doesn’t mean that I run out of room inside the bodywork for the tyres. 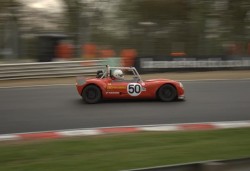 As for the racing. I qualified 10th (5th in class) and 11th (7th in class) for the two races. Not brilliant but arguably not bad for a new car. I’d put some tell-tales on the rear suspension for qualifying and I realised that it was bottoming out which isn’t clever. (I could really do with some of the progressive rate bump stops I used on the Fury but I’ve been unable to locate any at the moment.) To try and control things a bit I stiffened up the ARBs and went out for the first race. I made a good start and disposed of a couple of people at the start. But, the car was very twitchy and I had quite a few moments including one trip through the gravel at Druids with rather a lot of wheel twirling. Hence a rather lousy result. Back in the paddock I softened up the ARBs again and just tried raising the suspension slightly. While doing this I was aware that I’d banged my little finger at some point, but I ignored it and pressed on.

The second race was a bit better although it was very clear in that race that cars I used to be able to outdrag I couldn’t anymore. Hence the mapping trip. All the same I finished in one piece and packed up. I was 11th (7th in class) and 8th (5th in class) in the two races. So, a decent basis but lots of things to do. My to-do list is getting longer again. When I can type properly again, I’ll tell you what’s on it?

Why can’t I type properly? Well, my little finger hurt more and more after the race and on Sunday swelled up rather a lot. A trip to A&E on Monday morning revealed that I’d broken it. Not seriously, apparently I’d banged it so hard, I’m guessing in the gravel trap moment, that a ligament has pulled on the bone so hard that it’s broken a bit off. I’m off to the Addenbrookes fracture clinic at the weekend where I will doubtless feel out of place with people who have really hurt themselves as apart from my relatively minor injury. At least I hope it’s minor. Bloody hurts though…

One thought on “Falling back”