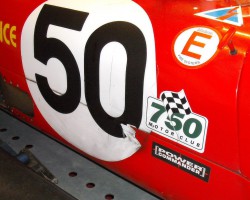 Yet again, it’s back into the garage with a few things to sort. However, before that, here’s something interesting. You will remember that I was in a real race at Silverstone with a certain amount of position swapping going on. It seems as though the action was actually a little closer than I’d thought, as here’s a  small battle wound…

Race 1 at Silverstone was fun but race 2 was rather disappointing. One reason for this was that I cooked the brakes in the second race. I certainly had been trying to use them harder (I’m not really a demon braker) but all the same it seemed a bit poor. So, I’ve been whiling away a bit of time by chaning all the pads and the fluid. So, I’ve just pumped most of a couple of litres of expensive brake fluid all the way through the system and out the other side.

I’ve also just realised, while typing this, that I’ve done all that and not actually sat in the car and checked that the pedal hasn’t gone all spongy. That’s a bit of a pain as the car’s actually now on the trailer again… 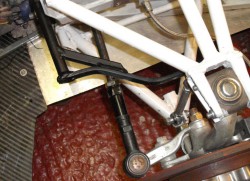 Something odd happened at one point at Silverstone, during the test day, in that the drop link to one side of the front ARB became detached. At the time I thought the ARB itself had taken a bit of a set but on closer examination it was just that the actuating lever on the end of the bar had moved sideways slightly. As such, I needed to stiffen things up a bit so I welded another bit of steel in to try and triangulate the lever slightly, as in the photo.

Of course, this doesn’t actually actually help get any weight out of the car. The issue here had been hightlighted by borrowing Bob’s corner weight scales while at Silverstone. When I’d set out on the track of building the J15 one of the notions that I’d had in my mind was that the J15 ought to be roughly the same sort of weight as the Fury was. If so, then I’d be pretty much on the weight limit. However, that’s turned out not to be the case and the biggest issue is the J15 bodywork. Measurements with Bob’s scales show that if I take off the front and rear bodywork (admittedly still with the lights attached) then the J15 is pretty much the same weight as the Fury was. However, adding those bits of bodywork adds about 30kg to the weight of the car. I’ve failed to persuade Jeremy to make me some lightweight bodywork; he seems very concerned about it cracking and no matter how many times I tell him that I don’t mind about that I’m not sure he believes me.

So, as long as I continue to ignore the “why don’t you design your own car” voice in my head I’m still wondering about how to get some lighter bodywork. One possibility is to use the J15 bodywork as a buck with which to make some moulds. However, this is not as easy as it sounds and will lead to huge amounts of work, not least because I’d have to fill in all the holes in the current bodywork so as to have a chance of getting a moulding out of a mould. 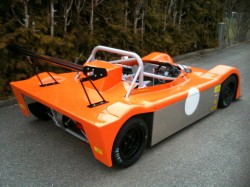 The other thing I’ve often wondered about is making something completely new. There’s a chap in Switzerland who built a mini-LMP style car as in the photo here. Quite a lot of this is actually just aluminium. He did, however, make a pretty complex mould for all the top of the bodywork and he made a pretty good job of it as you can tell by the reflections. I’m not sure about the rather ugly cover over the airbox though.

Anyway, back to the real world. You may remember that I had a problem when I first installed the ’08 engine with the sprockets getting pretty chewed up. To be honest, this continues to be an issue although a rather less serious one after a lot of time spent aligning things absolutely as well as I can. I decided to have a rather more dramatic go at this by installing a hard anodised driven sprocket. What’s more, I decided not to split it to make sure that the chain runs just as smoothly as I can make it. I spent 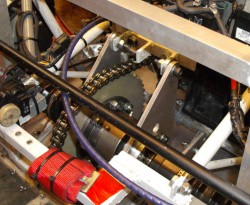 some time working out what the right size was so that I could get a reasonable amount of gear ratio adjustment by just using 14, 15 or 15 tooth drive sprockets.

Of course, fitting this sprocket is a lot harder as I had to remove one of the driveshafts and take half the transmission carrier off. However, I did finally do it and here it is. It doesn’t really show up well on the photo but it’s a fairly fetching light gold colour which is quite nice.

And, in today’s second “you dozy twit” moment I’ve just realised, while looking at the photo, that I’ve forgotten to put the chain guard back in place.

The other thing I’ve done is to change the oil. That’s no big deal, you might think, but it turned into a bit of a marathon. I think I might have mentioned that I had a bit of an oil leak at Silverstone. I changed the O ring on the cooler take-off sandwich plate as the first part of fixing this. However, it turned out not to do the entire job and there was still some oil coming from somewhere. After some effort I tracked this down to the clutch cover. While at Rockingham we’d had a bit of a leak which seemed to be due to a bolt being missing from the clutch cover. We replaced this but I checked a but harder the other day only to find that all the clutch cover bolts were loose, almost as if the cover had been  replaced, poorly, by the breaker who supplied the engine.

All the same, it seems to be OK now and the clutch does work so perhaps it’ll be OK.

While changing the oil I removed the plugs to let me spin the engine over. I was concerned that they looked a little  bit too pale. Although the air-fuel ratio, as measured by the wideband lambda, looks about right I might use the buttons on the front of the Power Commander to richen everything slightly. The  reason why this might be happening is that the snorkel is actually managing to shove a bit more air into the engine that is expected.

So, that’s about if, apart from correcting the fauxs pas mentioned. I’m pretty much set for going testing and racing at Brands…