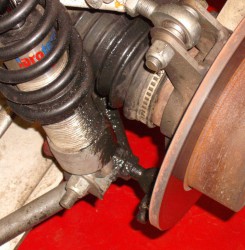 …in which our intrepid hero sets out on his fifth quest to slay some unperceived dragon, albeit starting by avoiding a trip to Pembrey in the land of the dragons.

Back in the real world I took the J15’s bodywork off to have a look at the damage as a consequence of the CV joint. As you can see a goodly quantity of CV joint grease was scattered about and I found a single one of the balls out of this tripode joint skittering about on top of the floor pan. The rest of them must have escaped captivity in Snetterton. 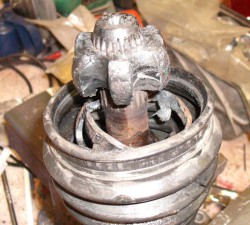 All of that grease had escaped through a sizeable split in the gaiter, which I suspect was caused by bits of joints making a bit for freedom. This was pretty much confirmed by the carnage inside the joint then I got there. In the photo you can see the internal race looking very much the worse for wear. The cage at the bottom should, of course, be positioned around the race but it’s decided that it doesn’t like the company there, or something.

So, replacement was clearly on the cards and I bought a couple of new joints. I took some care to get proper GKN ones as many other people, such as Adrian, have had real problems with joints of dodgy provenance before. Certainly the GKN ones were about twice the price of the cheaper ones I found.

Having bought some new joints I have to take the old one off. That race took some removing, and I only managed it with the help of an angle grinder. The thing must have been dying for a while as the incessant progress of the balls up and down the grooves had essentially pushed metal around, in such a place that made taking it off the proper way essentially a non-starter.

Eventually, though, I managed it and I fitted the new joint to the driveshaft. Fitting this back in the car, though, proved a bit of a trial as this joint managed to foul on the body of the upright, essentially locking the driveshaft solid. I fixed that by fitting a small spacer between the end of the CV joint and the inner face of the hub. I’m pretty sure that’s an OK thing to do. I could have turned down the body of the CV joint itself, or even ground something off the upright, but that seemed like vandalism.

I  actually replaced the other outer joint as well, just in case, keeping the apparently fine joint there as a spare. 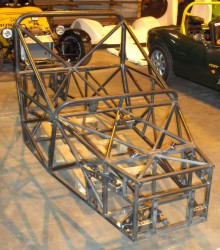 However, this is all probably nugatory effort as I’m building a new car, the fifth car I will have built. I do admit to feeling bad about two things though. Firstly, I’ve been telling myself for ages that I ought to design a complete car. Secondly, it seems very unappreciative of the J15 which is a fine car, just not quite up to running as near to the front as I know I can get as a driver. It’d make a great introduction to racing though, especially in RGB of course.

The Sabre, though, is getting closer to a reality. Andy now has my chassis and I went up there today to have a look at it. In the photo here it’s just sitting on the floor in Andy’s  unit. The intention is to get it home pretty much in this state and to build the car up from there. I’ll then take it all apart again and get the chassis powder coated. Although this sounds tedious, all the books say it’s the right way to build the car as you resolve all the issues that you’re  going to have which might need to change the chassis  before you have to coated.

A closer look at the chassis shows the reason I decided to do this and not design and build my own.  In a nutshell, 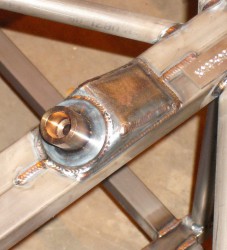 I’d never have been able to achieve this sort of quality (on the right)  in the fabrication. To be honest, the bloke who welded this is frankly a genius… That’s the turret for the front suspension rocker, by the way.

The other nice thing about the Sabre is that Andy is paranoid about having all the parts sorted out, drawn up and catalogued. He’s in the process of getting together all the bits for my  car and 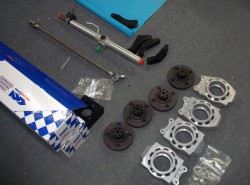 this is some of them in the Andy’s office. (Well, it’s sort of an office…)  Note that the uprights, at the bottom, are all the same.

With luck I’ll get the new parts next weekend. In the meantime it’d be best to find somewhere to put the J15 (or for some nice chap to come along and buy it off me!). If it comes to it I could put it in Andy’s unit which is pretty large.

So, this is the start of the fifth car build. Watch this space…