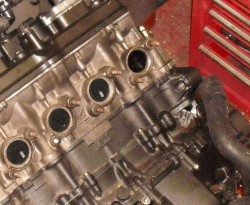 I know. Sorry to one and all but I just haven’t had the time to write this. Actually, if I’m honest that’s probably not true as I have found some time to do other things as you’ll see below. However, I should have found the time somehow or other.

All the same, a little report on what’s been happening. About a month ago it was time for Anglesey and we made the long trek up there on the Thursday, arriving a fairly sensible time to set up in the grassy bit of the paddock that we’d been allocated. That was useful as it was time for the annual RGB marshalls BBQ where we run a free BBQ for any marshalls that turn up. Usually a good time is had by all. This time, mind you, a blow-up doll appeared; it was wearing an orange suit though so I suppose that’s OK!

The plan was to test on the Friday, get quick and have a good weekend. Well, that was the plan anyway…

I took it easy on the first session out, although to be fair I was fighting the back end of the car again, of which more anon. Still, everything seemed OK and I lined up for the second session. After a couple of laps there was the obligatory red flag and we pulled into the pit lane. Then out again and half way round the second lap the engine made an odd noise. It sounded for all the world like the exhaust had come adrift, something that happened at the start of last season. So, I slowed down, put my hand up and motored slowly back. Then it just stopped making a rather unpleasant sound. Ho hum.

Back in the paddock and it was obvious that there was something amiss. There was a certain amount of oil around and there was the odd bit of casting in it which wasn’t clever. After I took off  the back of the passenger area it was very obvious that something was seriously  awry because there was a big of conrod sticking out of the block as you can see if you look hard at the photo at the top of the page.

So, at that point I was in the process of packing up, although we’d have stayed to watch the racing and run the BBQ. However, John Cutmore wouldn’t hear of it and I was instructed to do a deal with Paul Nightingale for one of the spare

engines that he had and we set to and installed it. Mind you, it takes far too long to change the engine, something of which more anon.

I might never know what caused the problem. I am, though, hoping against hope that the crank on this one won’t be too damaged. That might mean I could make one spare engine out of two dead ones…

Back to Anglesey, though. I got up early on the Saturday  to finish the last touches of the engine mod. After that a little drive around the paddock and all seemed to be well. I then did all the usual stuff, signed on, checked the fuel 15 times, chatted, had a bacon sarnie, chatted some more, check the fuel again and this time the oil too and then we were out for qualifying. Didn’t do too wonderfully really as I was 14th (10th in class) in both races. The car seems to be handling worse and worse, although perhaps that’s the driver getting more and more frustrated.

Come the race, though, there was more to be frustrated about. This is Austen’s video of the first few seconds of the race, you’ll see me appearing from the right…

As you can see, Austen (who was tipped into the spin by someone behind him) managed to hit my left rear with both the front corners of his car. I think the first impact was actually pretty benign. However, after the second one you can see there was a fair bit of bodywork damage and, as I discovered as I set off, about 50mm of toe-out on the left rear which meant I retired behind the same barriers where I’d watched the test session the previous day.

Back in the paddock after the race I inspected the damage. It actually wasn’t as bad as I’d feared the bodywork will need a bit of work (still haven’t done it!) but the rear suspension had been damaged by having the rear toe-link bent. I fixed that with the aid of a large hammer and a vice and I was OK for the next day.

At least I managed to finish that race although it wasn’t too wonderful. I got a decent start (the one high point of this season) and then spent some time trying to keep Tony and Steve behind me. I’d pull away in the straight bits but as soon as it got at all twisty I lost time quickly. Anthea was watching from the top of the hill and commented on how out of shape the car looked all the time. All the same I ended up 10th, 8th in class, which I suppose isn’t too shabby. I’m just aware how much better it could be though; in particular if I could stick the rear end down rather better.

So, back in the ranch now what am I going to do about it. I think I’ve mentioned before the notion of rebuilding the rear end of the car completely and I’ve actually been getting on with this. First of all I’ve been re-designing the rear suspension with: 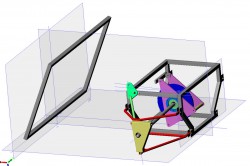 Here’s what the CAD assembly looks like. That’s the current diff assembly sitting in there. Also, that slanty bit is the back of the seats. It seems to work so it seems sensible just to use it. What’s more, I already had the CAD models for it.

You might well wonder what the uprights I’m using here are. (OK, you might also note that some bits of the assembly appear to be held in place with skyhooks. I’ll sort that later…) After some discussion I ordered the ones that Brian and Ian Baldwin designed for the BDN S3. 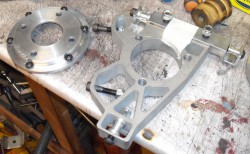 What’s more, I got them at the weekend as you can see in the final photo here. I’m actually rather chuffed with these bits. Note that there’s an aluminium brake bell here as well. The biggest issue of using these is that I’m going to have to get some different rear wheels as the upright uses a Vauxhall hub and stub axle with a different PCD. Mind you, the offset requirements are also different so that’s not really a big deal as I’d have to buy some more wheels anyway.

The plan now is to start fabricating that rear subframe. Once that’s done, and the season’s over, I’ll cut the entire rear end off the car and then weld stick them together with some welded sticks… Should only take a few minutes to do…

One thought on “Grovelling…”