…even though you might be justified in thinking this given the level of activitiy hereabouts. As I’m fed up with William complaining all the time it seems to be about time to catch you all up. So, settle in kids, and let’s get going…

I left you talking about the bodywork and whether to paint it or not. In the event I decided to leave it plain but to add some red bits on top of the bits of carbon that weren’t so nice. 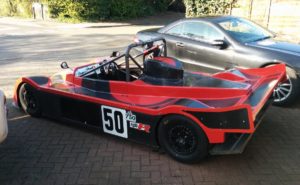 At least that was the idea. I then had a rush of blood to the head and decided to use some vinyl wrap for the red bits rather than just painting it because “it would be easier”. After weeks spent stuck inside seemingly acres of sticky vinyl I ended up with something serviceable but it was clear that it would  have been easier to just paint the bloody thing. Whatever, here it is on the drive squeezed between the motorhome and my road car. 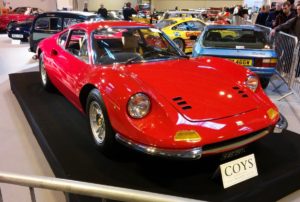 The road car’s a Mercedes SL which is something I’ve wanted for years. Mind you, it’s not  the Dino 246 that I really want, like this one spotted at the Autosport show in January. Mind you, bet I couldn’t get my legs in it. 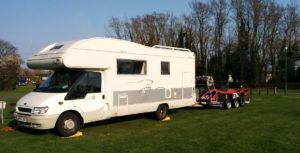 So now we were getting closer to the season actually starting. Colin and I had decided a while ago to go to Spa for a couple of trackdays run by the nice people at Javelin trackdays. So, I decided that that was going to be my pre-season shakedown and we set off. The photo here is of the entire wagon parked up in Kent before an early ferry. 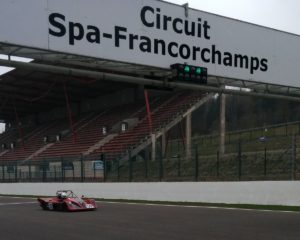 To cut a long story short we had a great time and I spent some time fiddling about with suspension settings and found a nice place to be. In fact, Colin drove my car—that’s him in the poor quality photo in fact—and commented on how good it was to drive. The only slight fly in the ointment was that right at the start of the day the car ran terribly. I’m pretty sure this was due to it being really cold the previous evening and there being a lot of water in the electrics. After it had all dried out everything was fine. Surprisingly so as it turned out. 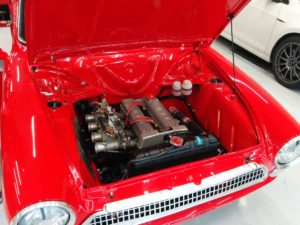 Continuing the classic car theme, there was an Italian owned Lotus Cortina in the same garage as us at Spa. The standard of preparation on this car was absolutely stunning. There was literally no part of the car that you could not have happily eaten your dinner off. For example, here’s the engine compartment. As a consequence, I’ve resolved to try and keep my car a bit tidier this year. I’ve started by buying a large quantity of GT-85 in the hope that close proximity in the garage will help tidy up the car.

As usual at Spa, my car was pretty much the fastest thing on track. There were a couple of cars that were quicker in a straight line but even at a fast circuit like Spa they didn’t have a chance (or weren’t driven well enough) to keep up around places like Les Combes and Pouhon. Spa’s a great circuit, by the way. You’re strongly encouraged to go there.

We were now getting close to the start of the season. One thing we’ve introduced in RGB this season is a requirement for sealing the engines and having a power run done on a dyno. So, I dragged the car up to Harrogate where there’s a friendly rolling road operator at Daytuner to get the deep done. The engine produced pretty much the power I was expecting, at around 170bhp at the wheels. That might not sound much but as the car with me in it weighs about 560kg that implies about 300bhp/tonne. That’s about the same as a  Porsche 997 GT3 RS of which there was one at Spa. He was nowhere and I bet he used lots of expensive tyres.

One of the consequences of the power run was that Damian, the dyno owner and operator, noticed that the clutch was slipping at full torque. So, I bought a new clutch pack from Andy at AB Performance and fitted that. Changing the clutch on a CBR1000RR is pretty simple, as long as you remember to take the transit bolts out of the new clutch. Luckily, I did. (It you don’t then it isn’t; a clutch that is.)

And so it was on to Snetterton. I’d booked half of the test day and everything was going swimmingly until I went for noise testing and I couldn’t disengage the clutch properly. Some investigation showed that the cable was coming out of the crimped on nipple at the end. Luckily, someone else in the paddock had a spare inner and I managed to attach it by a bit of subterfuge involving a couple of solderless nipples.

After that I managed to get out in an afternoon session. (Luckily I know the staff at Snetterton and managed to parlay my morning session into an afternoon one.) After that it was another paddock night and then out onto the circuit for qualifying. I managed a 2:01.57 which is a whole heap faster, about seven seconds faster, than when I last raced here in the J15 in 2013. However, that was the last race I did with the J15 before I got the Sabre going. Unfortunately, on that day the pole time was 2:00.76 and this year it was 1:56.63. That gives you an idea how the formula is getting faster and faster. In 2013 I was 9th on the grid and this year I was 9th. Plus ça change.

Still we lined up on the grid and set off. Here’s the video of the complete race; it’s only 55 seconds long so you won’t be bored…

That is, I started and then got punted in to the wall. I’m made a rubbish start which is probably a good thing as otherwise I’d probably have been hit by Sam who was run into by someone else. A deeply depressing start to the season and, I’m afraid, an indication of why RGB is getting to be less fun that it used to be.

Back in the paddock I inspected the damage. I’d got some bodywork damage and many of the bodywork clips had been torn off. (The carbon is pretty strong and capable of ripping a bonnet clip to pieces.) I’d also got a severely bent wheel, a bent wishbone, and quite a few scuffs and scrapes. Nonetheless, I managed to patch it back together, admittedly by just riveting the bodywork  back on. If the scrutineers had asked to see something after the race I’d have had to drill the rivets out again. I also put the testing tyre on to replace the wheel that was mullered. Luckily, I managed to find a new wishbone from the nice chaps at Aries Motorsport.

So, I did manage to get out in the second race. Here’s the video:

It’s not a brilliant race, although I did managed a decent move around the outside of James at the remodelled Coram. It was all a bit slow though, probably because the car was still a bit out of alignment; I’d just run out of enthusiasm getting the car finished.

Back in the garage I had to work out what to do about the bodywork. At first I was thinking about making new versions of the front and rear bodywork. However, that’s a lot of work. So at Adrian’s suggestion I looked on the EasyComposites website and watched 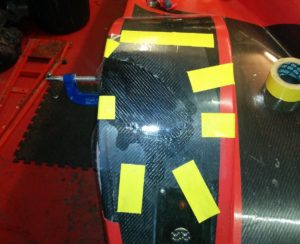 their video about carbon fibre repair. The EasyComposites videos are essentially how I learned to make resin infused carbon fibre and here they were telling me how to repair it. The answer is, essentially, that you use release film to make a small local mould and hand layup carbon using some special, very fast setting, epoxy resin.  The photo here shows one of the repairs. I repaired about 5 parts of the bodywork in this manner. In one place I actually managed to reconstruct and entire corner that had been torn off the bodywork. 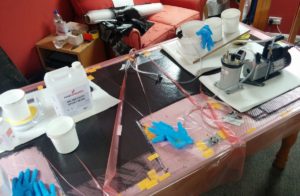 The largest piece of damage, though, was the splitter which was essentially toast. So, I made a new one! Luckily as it’s flat it’s easy. What’s more, Charlie wanted to learn how to infuse carbon so we spent the morning together making this part. Here it is, being infused.

With that it was “just” a matter of putting the whole thing back together and realigning it. Took ages… But, once it was done it was off to Croft for rounds 3 and 4. The weather was set to be nice apart from the odd worry. I qualified 8th on the grid and then the aforesaid worrying set in. Turned out I was right to worry as it absolutely pissed down in our race on the Saturday. There was a huge rush in the 20 minutes before the race to put the car onto wet settings and put the wet tyres on. However, I had a sort of half decent race running in very close proximity to Olly and Jason for much of the race. Luckily, we managed not to hit each other. Mind you, I ended up 10th which wasn’t too clever. I’m not going to show you the video because it’s basically spray…

The second race wasn’t really much better. I got a half decent start (I’ve been working on my technique here) and it looked as those Jason and I were going to manage a decent race and then his engine let go. After that I was pretty much driving around unaccompanied. I could see Mark and Colin behind me but they were far enough back to be no worry and I just ran to the finish line where I was 7th overall.

At least there wasn’t much to do before the next meeting, at the tight and twisty Brands Indy course. I changed the engine oil and moved to some shorter gearing though.

This weekend was blistering hot all the time, around 30° the entire time. I think that’s exposed an issue with the cooling ducting on the car, since the meeting I’ve fixed some leaks in this area. All the same, I got through the weekend pretty well. Testing went reasonably well and I managed to dial out a problem with mid corner understeer. During testing, when it had been a bit cooler, my times were around 49.6 seconds. However, my qualifying time was up to 50.6 seconds, which is a shame but everyone seemed to be slower on the Saturday and Sunday. I ended up 7th on the grid in both races.

Both races were, in some ways, similar. In both cases Richard, in the new class F Spire got in front of  me at the start and I had to get past. In the first race I managed to get past into Paddock while in the last race I got him on the line by a whole 0.03 seconds. Mind you, he got a 5 second penalty for running off the track which made it rather more distant. (Or should have done, it never actually appeared on the result sheets.) Anyway, here’s the videos:

So, that’s a whirlwind tour through the first half of the season. Luckily, there’s not much to do before the next race…