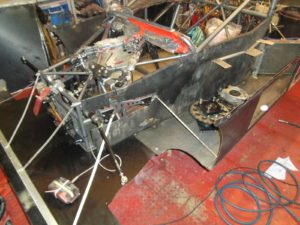 I’ve actually been doing things! What’s more, I’ve been doing some of the things that I said I’d do which is miraculous. The first thing, though, was just to finish off taking the thing to  bits. Along the way I’ve removed the bodywork,  entire suspension, all of the transmission, the engine and much of the various additional stuff like the cooling ducting. Hopefully, I can now starting putting things back together again. 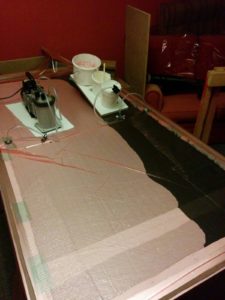 One thing I want to do is to change the ducts in the sidepods slightly. As the existing ones are made out of aluminium I’ve been experimenting to see if I can make some bendy carbon fibre. Luckily, it seems that I  can by the simple expedient of making it thin and leaving out the core material. After the successful experiment I’ve made a large piece of similar material, there it is being infused in the photo. Once I take it out of the mould (a fancy term for a sheet of aluminium, I’ll hopefully be able to cut it up and replace the ducts which are currently sitting on the garage floor. The idea is that doing this will reduce the drag slightly, and might move air out from under the front of the car with a bit more alacrity, helping brake cooling slightly. Of course, it might just bugger up the cooling. 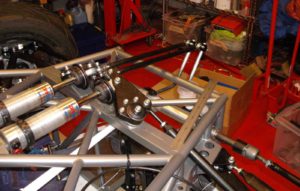 While I wait for the CF to come out of the mould, I’ve been experimenting with the front ARB. The original version of this is shown in the photo here. The bar itself (a ludicrously heavy solid 1/2″ diameter thing, is down on the front of the chassis and the actuating levers sit a long way above the chassis. This height is who necessitated the proboscis on the first version of the T2A bodywork. 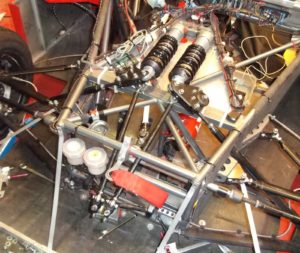 For last season, I re-engineered things so that  the drop links stayed inside the chassis , beneath the top front rail as you can see in the photo. That’s worked OK for a year but the way it all moved meant that I’d got precious little adjustment possible, and I compensated by making a bunch of different bars of various rates. (One of which I appear to have lost…) 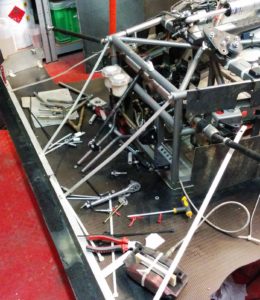 various bars were and I’ve put all the numbers that I’ve derived from the last season, where I spent some considerable time adjusting spring rates, damper rates, bump stops and so on, into a spreadsheet that’s supposed to calculate the optimum roll moment distribution for me. I’ve got some new ideas on how to make a new ARB and I’m going to put this into effect in the next few days. I hope. Experience is that it’s surprisingly difficult to engineer an ARB because it’s hard to get the articulation to work right for you. As you can probably tell from the amount of detritus stacked on the splitter it’s going to take some doing. 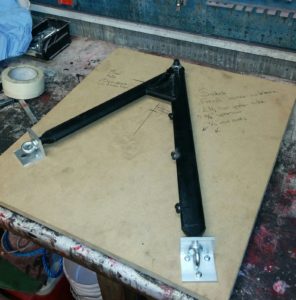 As I mentioned a while ago, as I’ve got the complete suspension off, I’m taking the opportunity to make some jigs so I can remake wishbones should I bend one. Making the jigs, as in the photo, at least takes away one problem. Mind you, if I break an upright I’m completely buggered.