A thing I’ve been concerned about for a while is whether the seat belt mountings are OK for use with the HANS device, which requires that the angle of dangle of the belts between the HANS and the mountings is within 20° of horizontal. So, I installed a seat (that is, the old blanket that I use for such things) and took a video of myself sitting down in the seat in various ways. The photo on the right is an image capture from this video, which I made with the video camera I inherited off my Dad.

The conclusion of this is that I needn’t have worried. I had assumed that I was going to have tp weld a bar into the cage for the belts to go over, but it isn’t necessary, as you might be able to tell from the photo. 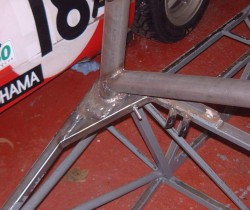 That’s good, so I could get on with the next thing. To be honest, I had intended the next thing to be getting the chassis off to the powder coaters as it’s essentially done now. However, Christmas has got in the way so I’ll have to leave that for a while. It’s no big deal really, as I can carry on doing lots of stuff, I just won’t be able to finally attach things to the chassis. However, I can do things in such a way that they’re a simple assembly job when I get everything back together.

One thing I did want to to before that, though, was to weld a couple of earthing points to the chassis. I ground all the nasty zinc off a couple of M8 bolt heads and welded them, in what I hope will be sensible locations, to the chassis. The one in the photo is in the engine compartment. 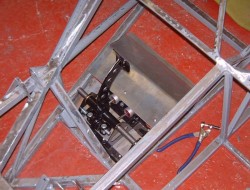 As I’m really thinking about the seat and controls here, the next thing was to attach the pedal box to the floor of the chassis, and make a cover for the master cylinders that I can park my size 12s on top of. The one in the photo is made out of some 2mm NS4 aluminium, as I wanted to be sure that it was fairly robust. Seems to do the job OK, at least at the moment.

Another thing that I’ve been thinking about for a while is whether I need to modify the pedals to make them a little further away from me. At first sight this isn’t absolutely necessary so I’ll leave well alone for the moment. I want to make sure that I do all the front end of the car in such a way that I can get access to all these things rather more easily than I can in the Fury. The complication on that car is that as the front of the car is the engine compartment it’s important that the pedal area is in a “fireproof” compartment, something that’s been useful in my car in the past, as you may remember. I did wonder, on the J15, about just leaving everything at the front open. However, if nothing else, it makes sense to insulate the passenger compartment just a a bit so that when it rains I don’t end up sitting in the backwash from the front tyres. 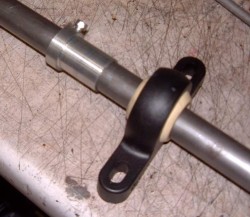 With the pedals done as far as I can at the moment, thoughts turned to the steering column. I’m planning on making this, as I did before, using 22mm CFS tubing running in 25mm Igus self-aligning bearings. To do that I made a couple of little sleeves to fit over the column tubing and fit snugly in the bearings. They’ve also got little  shoulders on them so that the thrust loads are transferred to the bearing balls. In the photo, the sleeve isn’t actually inside the bearing yet. I’ll clamp the sleeve to the column with a couple of grub screws.

I also added a spline to the bottom of the column that will connect to a standard Escort style universal joint, and I’ll also use a standard Escort lower column section. It’s amazing, the MkII Escort passed into history years ago but vast quantities of bits are still available for them because of all the use they still get as rally cars. 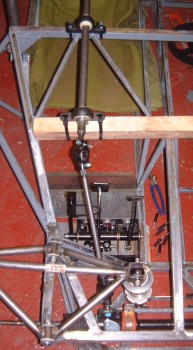 I then needed to work out where the column was going to go in the car. This is still subject to a bit of change but the photo shows where I ended up on this frosty Christmas Eve. As you can see I’m using tie-wraps and an advanced lignin/cellulose composite spacer to mount the bearings.

The one problem with this is that on full depression the brake pedal bashes into the lower steering column. This isn’t in a way that my foot also hits the column as at that point my foot can’t reach that far up with pedal. I can’t just raise the lower bearing as the angle of the UJ at the bottom of the upper column gets too acute and it starts binding up. I had been a bit concerned that the lower column was too close to the suspension rocker, hence that rocker being in the photo, but I needed have worried on that score.

Right now, I’ll think I’ll sleep on it. One thing I do want to do though, is to trial fit the front bodywork as that I can see where the steering wheel goes with respect to the bodywork.

Finally, an interesting observation is that the upper steering column is  much shorter than the equivalent one on the Fury, which also uses the same Escort lower column. This is clearly because the  driver is rather closer to the front of the car than in the Fury, hence the pedals being so close to the front suspension. No problem, just interesting…