I’ve got empty garage syndrome. Although, I must admit to seeing the Fury go to a chap that’s clearly intending to race it. As you can see, there’s now only one red car in my garage. So, I could get on with sticking myself into the car; making a seat involves quite a lot of mess as the cut-up bits of foam get everywhere.

Luckily, it wasn’t permanent and I escaped. After much faffing about with plastic bags, expanding foam and gaffer tape I ended up with this. It’s black, as you can tell, as that’s the only colour of tape I’ve got at the 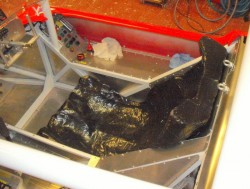 moment. That’s why the photo looks so awful. For now it’ll have to do. It’s not the prettiest thing in the world but it does work and I seem to be in about the right place. I’m pretty sure that I am going to do what I mentioned, as make the dash even smaller and move the Palm; I could see it but I really think it’d be better elsewhere.

The other thing I’ve done is actually run the car up to temperature. There’s a couple of problems with this though. There’s some coolant on the garage floor and I’m not sure where it came from. What’s more, I’m not entirely sure that the radiator is going to be up to it. I had real trouble keeping the temperature down even with the fan whizzing away like mad. That could, though, be a consequence of the long pipe runs and a non-too wonderful fan switch. I must admit that I’m considering fitting a manual switch to this, even though I’d have to change the wiring.

However, that all meant that I couldn’t put it off anymore. So, with loins firmly girded and a Greek chorus of dissenters, I tried it:

As you can tell, the reverse is not exactly wonderful, and it stalls the engine with alacrity. Let’s hope it’s OK though.