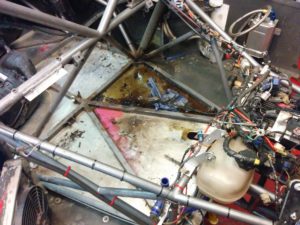 So, it’s nitty gritty time again. When we were last here I was starting to take the car to bits and I’ve been pressing on with this.

First thing to do was a major clean up. After taking my spare engine, which has been sitting on the garage floor wrapped up in cling film for a couple of years, up to Mike Smith‘s place to have it refreshed I took the existing engine out and wrapped that one up in cling film. The back of the car then looked like the photo at the top of this page.

As you can see it’s a hell of a mess, compounded by a small amount of oil and coolant that’s leaked out while taking it out. What you 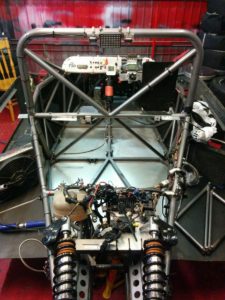 can’t really see is the amount of grime that’s accumulated on various surfaces. As I said at the start of the year I’ve been trying to keep the car cleaner this year and I’ve succeeded to some extent, but not really enough.

Anyway, I’ve since set about it with cleaning implements and massive quantities of brake cleaner and it now looks like the next photo. Hopefully you’ll agree that that looks better.

As you can see I’ve taken the rear suspension off completely as I’m replacing the complete drive train. The new sprockets and chain I’d 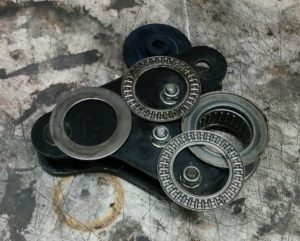 ordered arrived today only for me to find out that even though the invoice said I’d ordered a 530 chain and driven sprocket I’d actually got 520 (skinnier) ones. So, they’ve gone back.

I’ve also completely inspected the rear suspension and taken the bearings apart in the bell cranks, as in the next photo. One problem I’ve had is that these bearings are preloaded by a bolt through the middle that’s retained by a single nyloc. Inevitably, this whole thing tends to tighten up so the bearings get tighter which really offends me. So, this year I’m going to fix this, either with some sort of locknut or by doing it properly and using a castellated nut and a split pin. Of course, that means drilling some bolts accurately which might be a bit of a pain.

I’ve also bought a huge pile of new nylocs as I’m intending to replace all of the ones in the suspension. Not because I’ve had any problems but they’ve been on and off a few times now and it’s time.

Right now, I’ve moved to the front of the car and am doing the set of things there. That is, at the moment there are no wheels on my wagon…

Once I’ve done this tarting up, the list of things I’ve got to do includes, amongst about 500 other things:

One thought on “Pressing on”