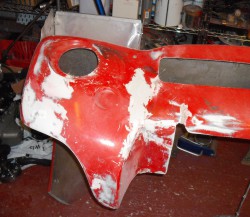 I’m sure it’s not like this at McLaren. In the limited time I’ve had since the Anglesey disaster (see Austen’s video in the last post for reference) I’ve essentially been patching the car back together. I’ve re setup it all up, after having the rear wheel knocked seriously astray and now I’m onto the bodywork.

This wasn’t too badly damaged even though it clearly got bent a lot. Nice to see that it’s mostly sprung back into position as the Fury stuff didn’t. As is usual for this sort of thing I held the outside properly together with gaffer tape and I patched up the inside by making it heavier. I’m now trying to get a half decent finish with some filler and lots of elbow grease. After that I’ll re-spray this corner (I’ll just have to blend it in, I’m not redoing the whole panel) and I’ll be ready for the next race at Mallory. After that it’s the Birkett and the end of the season!