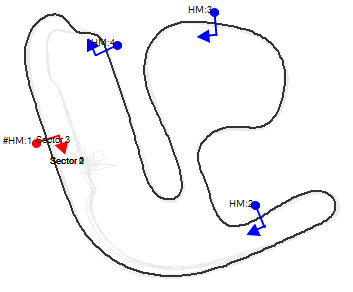 Time for the first track outing of the new season. I booked a track day with Bookatrack at the Rockingham circuit which isn’t too far away from us. I went to Rockingham many years ago in the Fury, when I was first learning to drive it. So, although I could just about remember the way round there wasn’t much in the way of knowledge; especially as the circuit we were using this time was different.

If you’re not familiar with it Rockingham is essentially an oval, albeit an oval that’s a sort of a squashed square. However, there’s a lot of twiddley bits of track in the middle and the circuit we were using was essentially one of the oval corners (bottom of the track plot above) and various bits of the twiddley stuff. But, after a day whizzing round I have to say that it’s not my favourite circuit by a long chalk. Apart from the bend on the oval it’s all low speed stuff so it’s just a collection of point and squirts, with no really flowing bits of the track. I’m glad we’re not racing there. (Of course, it might be different in a race…) In may ways it’s reminiscent of the Indianapolis circuit that the F1 chaps used to use; that was dull as ditchwater too…

We got there a bit late, courtesy of the plonkers who decided to dig up one of the bridges on the A14, neglecting to advertise this fact at a place that would have allowed us to make a decision to go a different route. However, we just got there in time. After the safety briefing we took our time and got the car ready. One small problem was that I only just scraped through the noise test; I’ll need to repack the silencer I think for proper action later in the month.

The day was vastly improved by having Adrian, Duncan and Charlie there to help for the day. It was amazing to come into the pits and just sit there while the dampers were adjusted. I spent a lot of the day twiddling with dampers trying to get a decent setting. Eventually ending up essentially where I’d finished last year. That’s no bad thing though. I’m pretty sure that the car felt more stable at the rear than it did last year. (Long term readers will remember last year’s first track outing was accompanied by a lurid spin under the bridge at Snetterton.) This time I was approaching the hairpin at the bottom right of the track map just shy of 130mph and I found I could just leap onto the brakes (you had to) without any issue about loss of stability.

I wonder how much of this improvement is down to the diffuser panel. To be honest, after I got home I remembered that I’d meant to try taking it off and seeing what the car felt like. I clean forgot, oh well… 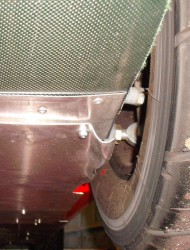 Most interesting, though, is the undertray after I got home. I made the new undertray as wide as I could manage it and I was always unsure if the sides of it were as well supported as they might be. They’re really only supported by the front of the diffuser panel. Looking under the rear of the car today the sides of the panel have been folded down by the effects of the air, what’s more in a rather interesting pattern as you can see in the photo. This has happened on both sides of the car and not just the one in the photo.

This has the interesting aspects of making the undertray not RGB-legal as it’s more the 10mm away from the horizontal. However, it should be easy to fix. I’ll bash it straight with a hammer and use some aluminium angle to stiffen up the edges.

Worst thing, though, was that despite my attention to the engine mounts over the winter and the careful re-alignment of everything the driven sprocket still seems to be suffering slightly from wear. (Although, to be absolutely fair, I don’t think I paid enough attention to looking what it was like before the trackday.) I think I might try and get a hard-anodised sprocket to compare with the current ones.

10 thoughts on “Rocking On”