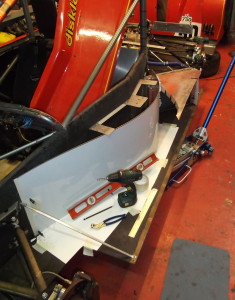 As I’d escaped from the West Country unscathed I finally had a bit of time to actually do something constructive to the car. I’ve been playing around with suspension settings a lot lately and I think I’m getting a bit more on top of the car’s handling. There were a couple of other things that I’d wanted to do for a while and I’d now put them into effect.

First up was to open up the sidepods to try and let a bit of the air in the front of the car out more easily. The obvious problem, though, was would it still cool successfully? As there was no way of checking 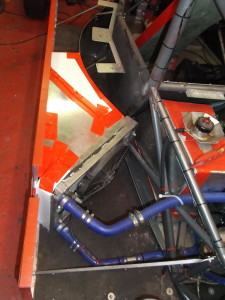 that in advance I might as well just do it and see what happened.

You can see some of the work half way through at the top of this post. The inner wall of the sidepod is now a single sheet of aluminium curved around in a pleasing manner. (That was about all the calculation that went into this.)

I finished all this by using some Correx to neaten up the ducts. Held in place, of course, by that stuff that’s called duct tape for a reason. Note that I’m trying to confuse you by taking the second photograph from the other direction! As you can possibly tell, I’ve gone to a lot of effort to seal the duct around the radiator. Experience is that this makes a huge difference to coolant temperatures. If you 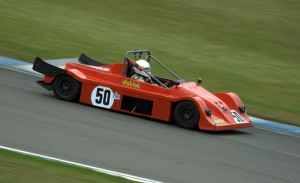 don’t seal things up the air seems to much prefer not going through the radiator.

To finish off this bit, here’s a photo of the car at speed at the last meeting of the season at Donington Park. Note the different sized air entry in the sidepod. I might try and reduce the size of this at some point, as that’d probably reduce drag a bit. I’ve had to move the numbers towards the rear of the car to allow for the changed sidepod arrangement.

The next thing I was wanting to try is something that’s also been on the car from the beginning. We designed the bodywork originally to have a larger “throat” at the front to allow air under the car and hopefully get accelerated underneath. I’ve always worried that the 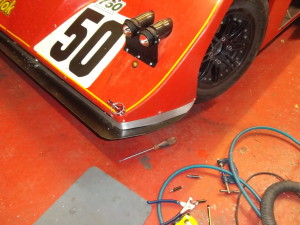 positive benefits of this were outweighed by the drag increase. So, in order to test this I wanted to make an alternative splitter. So, I did so, I made a single flat sheet of carbon/epoxy composite and cut a new splitter out of that. Of course, that meant that the bodywork no longer reached the splitter and so I fabricated some bits of aluminium to fill the gap. Later on we covered those with some red gaffer tape so it didn’t look too bad. You can see the effect on that photo of the car at speed above. Assuming this works, and I still don’t know really, I’ll make a proper infill out of some composite material, I’ll also fabricate a carbon/epoxy crash box so sit on top of  the floor in front of the chassis.

So, on to Donington Park. We were racing on the GP circuit which I’ve never done before and, due to Donington’s unique approach to testing (roughly translated as “if you want to test we’re going to charge you, so much that you won’t actually come along”) I wasn’t able to test before the race. All the same, the rest of the circuit excluding the Melbourne loop which is the sticky out bit at the bottom, was known to me although not as well as I’d like because of that same testing policy.

So, qualifying was a bit of a lottery and I discovered that braking into the Melbourne Hairpin was really tricky because you come over the brow of a hill and the corner is just there before you expected it. I ended up 12th on the grid in both races, 9th in class in each case. That wasn’t too bad in that I was still trying to work out how to drive the circuit. In particular, although I did eventually figure out the hairpin I never worked out what the line was around the left hander on the pit straight. Mind you, the same seemed to apply to everyone as there were wildly different lines in use here.

The races were sort of OK although I was frustrated with not getting as well as I might. The the first race I was behind Austen for a lot of the time and, frankly, made a complete dog’s breakfast of getting past him and staying there. The second race was a bit better in that I made decent moves on both Austen and Stevie in the first couple of laps and then managed to get past Jonathan at the hairpin. Annoyingly David, who started pretty much at the back of the grid then passed me even though he hadn’t managed to do so in the first race.

Here’s the video of race 1:

and this is the second race:

So, that’s the end of the RGB season. I finished the whole thing in 15th place, or 8th if you just look at my class. That isn’t too bad but I feel I’m going to have to up my game next year. Or perhaps retire…

Not yet I think.

That may well be the end of RGB 2015 but the Birkett is coming up. Long time readers will know that our team won its class last time out. That’s probably going to be harder this time but hopefully it’ll be fun. Watch this space.