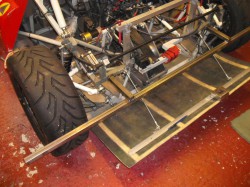 Yet again, and extremely tiresomely, it’s time to set the car up for another race meeting. For some time now, I’ve been thinking about making it possible to mount a setup frame on the car, much like the one described in the Pashley book. Essentially this allows you to construct a rectangle around the car from which to take measurements to the wheels.

The first photo shows the rear of the car with the rear frame bolted into place. There’s a similar construction at the front of the car, except that’s bolted to the wishbone pivot bolts rather than the chassis itself. With those bits in places I measured, attempting some accuracy, a fixed distance from the centre line of 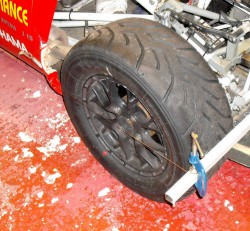 the car. In an ideal world I’d then have bolted some aluminium angle down the length of the car to form the sides of the box.

However, this world’s not ideal and two 3.5m lengths of ally angle were not to hand so I stretched some 0.8mm welding wire down each side of the car. If you look really hard at the photo you can just about see the wire.

Having used this now it’s clear that this is a very accurate way of setting the up the car. What’s more, it’s shown me that I need to move one of the rear wheels slightly, by winding some of the rod ends in and out. This one something that I couldn’t really had detected beforehand so I’m pretty 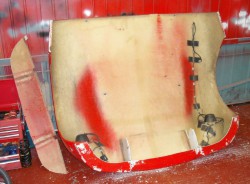 Something else I’ve been meaning to do for ages is to cut some of the surplus GRP from the front bodywork. In the photo you can see the bottom of this bodywork along with the bit that I cut off the bottom. That small bit of GRP weighs very nearly 1kg, so it’s easy to see where the 30kg that the combined front and rear bodywork weighs comes from. It might be sturdy but it’s ridiculously heavy; in fact, it’s probably the major reason for the J15 still weighing more than the Fury did.

Finally for this update, something I’ve been meaning to do for ages is to put

some mesh on the air intake at the front of the car to make some effort at protecting the rather expensive radiator that’s in there. I finally managed to get my act together.

I’m now just about ready for the next race weekend. Now, if I could only work out a way of teleporting the car onto the trailer I’d be well pleased.

One thought on “Setting up again”