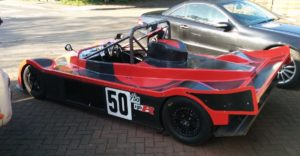 …in the garage that is.

Regardless of what happens next I need to sort the car for next year. Inevitably, I’ve got a long list of things I ought to do.

First up is the bodywork, molested at the recent Birkett which I need to sort out. As a reminder, it started the season looking like the photo at the top. The black is naked carbon fibre whereas the red stuff is vinyl wrap.

In retrospect the vinyl was a mistake as it was really time consuming to apply and it’s not worn very well over the racing year. Mind you, 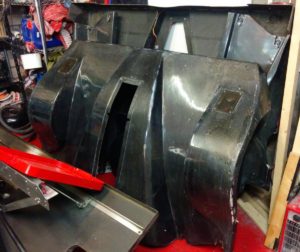 that might be due to the incompetence of the installer.

This means I’m working out what to do with it now. In the meantime, I’ve stripped all the red stuff off; here’s a pile of CF as it is now. As you can probably tell, it’s a bit battered. After all, it got slammed into the pitwall at Snetterton and was molested by a Honda Civic a couple of weeks ago. As such, I’m going to do something involving paint. This could be just painting the whole thing or painting where the red vinyl was. I suspect that I’ll take the former option. 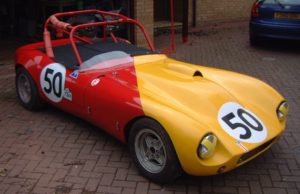 The issue, of course, is what colour to do it. Anthea is agitating for me to use the old red/yellow diagonal scheme that I painted the Fury in many years ago. (Note the link to a really ancient page on this site!) There’s a couple of problems with that,

though, not least that it confused everyone. There’s also the issue that it got set on fire and I’m not sure that’s a precedent I want to follow. In retrospect, I’m not sure how I ever found the energy to rebuild the car after that… All the same, if you’ve got any ideas feel free to suggest by adding a comment here…

One thing I want to do is to change the radiator ducting. There’s something odd about it at the moment in that there’s a reverse flow 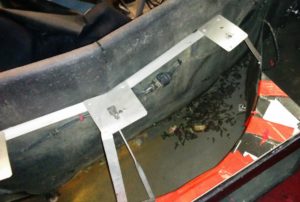 on the inside of the ducts. I’ve noticed all year that my right hip gets quite warm and looking at the detritus that was inside the ducts, as in the photo, you can see things like bits of torn off exhaust wrap. You’d have hoped that would exit rearwards but apparently not. 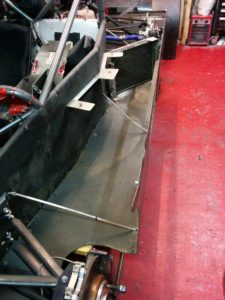 So, I’ve completely cleared out the sidepods of the car while I design what’s going in here next. Whether I show you or not is anyone’s guess…

The biggest issue with the bodywork, as you’d expect, is that I’ve got to fix the damage. There’s two obvious ways of doing this: patching up or making new parts. I can’t face making a whole new rear part at the moment as it’s too tedious. What’s more, I ought to be able to use the fact that I’ve actually got the bodywork moulds to make patching things up a bit easier. So, first thing was to remove all the excess furniture on the rear 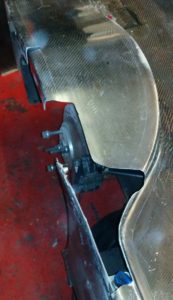 bodywork such as clips and lights. I then cut away all the bits that had been extensively Civiced. It now looks like the photo here. In the process I discovered rather more damage that I thought in that the side panel is almost completely broken through. Alarmingly, it seems as though oil cooler supported part of which means that I’m lucky the cooler, and the engine, survived the impact with Mr Honda’s finest.

That cutout removed one of the parts that was damaged at Snetterton so it wasn’t much of a loss really. If you’re paying attention, you’ll remember that I patched up the bodywork by making a sort of in-situ mould with release film. In fact, you can see one of the resulting patches right at the top of the photo.

The plan this time is a slight variant in that I’m planning on putting the entire rear bodywork back in the mould. I should then be able to hand layup (using the same repair resin) a patch that fits exactly. The one issue is how I get it to sit in the right place while the resin goes off. At the moment I’m thinking of sitting on it.. 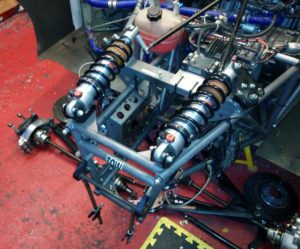 Before doing that, though, I thought I’d take the car to bits more enthusiastically. So, I’ve taken all the rear suspension off and today I removed the diff. In the process of doing that I discovered, as I’d suspected, that one of the diff bearings was getting a bit tired. Not surprising as I remember when I bought the bearings that I was feeling stingy and bought a cheaper variety than I perhaps should have done. 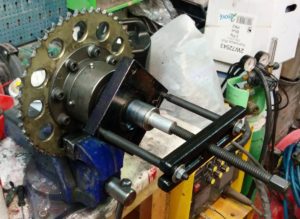 So, I’ve ordered some more, rather expensive ones this time and spent a while today pulling the existing bearings off the diff. (Easier said than done, see the photo.) It’s clearly an expensive time too as I’ve also ordered new sprockets and chain. Every one of the three sprockets I’ve used this year (two drive ones and the driven one in the photo) is hooked to some extent and I’d rather just get some decent ones.