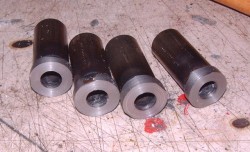 I took time out this evening from the suspension bushes because I’m waiting for a particular tool to arrive in the post from those nice people at Chronos. Instead I made these things, which are bushes for mounting the engine. They’re just bits of CDS tube, cut to length and faced in the lathe (which means that ends are actually square), welded to some bits of 3mm steel, turned so that they’re mostly round and then a hole drilled in the end and the end faced off properly. Even if I never used it for anything else, the lathe is fantastically useful for drilling holes in the centre of round components, something that’s really difficult otherwise.

END_OF_DOCUMENT_TOKEN_TO_BE_REPLACED 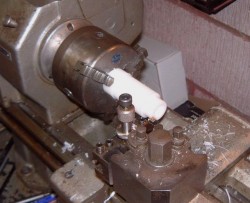 I’ve still been thinking about suspension bearings. At one point I’d convinced myself that the thing to do was just to cut up the existing wishbones and weld some bushes in into which I could put some rod-ends. I still might do that, to be honest. In fact, I suspect Jeremy would be happy to provide a complete set of new ones.

However, in the meantime I was talking to one of the Baldwin chaps at Silverstone. Ian is one of the main designers of the BDN car that won the championship last year. What’s more, his new car is running well this year although hampered by a late start. I was talking to him about bushes and he said that the new car, as a bit of an experiment really, was using bushes made with Acetal. This is an engineering polymer that is commonly used for similar things. I did some calculations and it does look as though it’s up to the job. (And, to be honest, it’s clearly tougher than bungy rubber or nasty polyurethane anyway.)

So, I bought a stick of it to see how it goes.

END_OF_DOCUMENT_TOKEN_TO_BE_REPLACED

I think I might have resolved the pedal box conundrum. On the Fury I’ve got a pedal box that came from OBP which works pretty well. I had spoken to them about their top-hung pedal box but given up because it was too tall. Adrian mentioned in passing that they did a bottom hinged one with the master cylinders pointing back to the driver. After looking at their website they do indeed do so, so I’ve ordered one! This is the photo pinched from their website here.

END_OF_DOCUMENT_TOKEN_TO_BE_REPLACED

I’ve been pressing on with the Spectre, albeit not making real progress although perhaps laying the basis for real progress. As I said last time I’ve been measuring up where to put the engine. Oddly, the big issue here seems to be access to the spark plugs and coils; everything else doesn’t seem to be much of a problem.

I think I’ve come to the conclusion that getting the engine as far forward as possible is actually more important than being able to easily access the spark plugs. I used to drive a Subaru Impreza. These have a fantastic flat four engine, I never was able to work out how they got access to the plugs in that, it must have been through the wheel arches because you certainly couldn’t reach from inside the engine compartment! I think for the Spectre I might have to make some access panels so as to get access from inside the passenger compartment. Even then it’s going to be difficult though and it might be necessary to slacken the engine mounts to shift the engine slightly.

END_OF_DOCUMENT_TOKEN_TO_BE_REPLACED

I’ve kept you all in the dark a bit about how the Spectre is going. Sorry about that, I just don’t seem to have found the time to update this site.

However, lots of things have been happening. And, starting at the end first, the most significant is probably that I went up to Jeremy’s place yesterday  to pick up the chassis and the bodywork. As you can see from the photo we managed to pile it all up on the trailer but, to be honest, we should really  have rented a van. Still, it worked OK.

END_OF_DOCUMENT_TOKEN_TO_BE_REPLACED 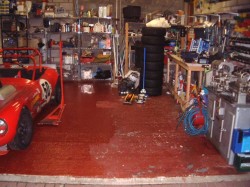 It’d be nice to get going, but of course I need to wait for things to be manufactured. In the meantime I’ve been getting the Fury ready for its next outing, and starting to organise myself for the Spectre build.

Apart from starting to make a big list of things to buy, do and design, I started out with clearing out the garage. I’m going to have to try and build the car with the Fury tucked in the corner of the garage, unless I can find some other convenient way of storing the Fury. In the meantime, I know this will work as I originally built the Fury while the Dax was still in the garage, and I think that was wider than the Fury is, even though it was a se7en-like car.

END_OF_DOCUMENT_TOKEN_TO_BE_REPLACED 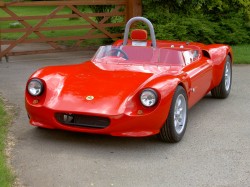 Back home now with the Fury, I’ve been taking the time to check carefully the engine installation that we did in rather a rush in the Brands pit garages. Alarmingly, the propshaft bolts were, not loose, but not exactly tight which is a bit worrying. All the same, the car should be easily back together in time for Mallory which isn’t for a month yet. END_OF_DOCUMENT_TOKEN_TO_BE_REPLACED