Last weekend was the first of out visits to Snetterton this year. We were running on the 200 circuit which is pretty much the same sort of layout at the original circuit, albeit with the hairpin at Montreal which is huge shame after losing Sear and the left hander at Murray’s which is a replacement for the original Russell chicane. It’s a shame to lose the original Coram corner and, also, Jim Russell’s name from the circuit. The interesting bits of the new circuit are all on the 300 circuit, as I tested on earlier this year.

So, as it was new, I booked a day’s testing and went up there on the Thursday evening. We got a half decent place in the paddock, or so we thought and settled in for the night. The next day looked sunny, in fact it was scheduled to be decent weather all weekend but, frankly, you can never tell at Snetterton.

Out on the circuit first thing and what was immediately apparent was that the recent suspension modifications had had a huge effect on the car. Most particularly, it was no longer trying to kill me. A pity I had to break my finger in the process. (It’s still hurting like buggery, I wonder if I should go back to the docs? Can’t see what they’d do though.) So, 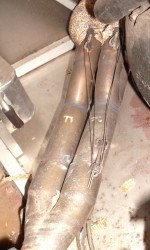 I started to settle in to the new car and the lap times were dropping when it started making a horrendous noise. Luckily, I’d heard this before when the exhaust fell apart at Brands. I pulled in and, indeed, it had come apart again. Odd because it seemed to have just straightened the locating split pin in situ… That’s a shame as I had to remove all the nice neat exhaust wrap I’d put in place.

I put it back in place and lock-wired around the tails of the split pin in an effort to make it stay shut.

The second session arrived and I was off again. Again, it felt better and, again, the exhaust fell apart again. Sigh. At least it was a different joint this time. So, again, I took off more wrap, replaced more split pins and, this time, put in some more ostentatious lock-wiring as in the photo here. That seemed to stay in place for the rest of the weekend but it isn’t pretty. However, it may be irrelevant, see later.

After that things got a bit better although I never felt that I was going anything like quickly enough. What was interesting was to play with the adjustable flaps on the spoilers. They made a surprisingly large difference. You could feel the greater drag with it in the highest downforce position but, interestingly, it was like that that the lap times were quickest.

Come race day and it was still OK. There were lots of us out for the weekend and it was great to see 32 cars lined up in the assembly area. In fact, some are still missing and  we could have even more out later in the season. For what the 750 club calls a “development formula” this is great.

Qualifying was OK, although it’s a measure of RGB that I’ve gone backwards this season. I qualified 9th (6th in class) for both races. The chaps at the front of the field have really gone forward this year. One reason is that the latest crop of engines is putting out a few more bhp. Secondly, some of the cars are getting rather more like proper race cars. I’m not too sure what I think of this, although I can’t see anything that can be done about it. I can, though, think of lots of things that I can do to my car.

One good thing is that the oil cooler and duct were working great. The highest oil temps I saw all weekend were in the region of 110° which is fine. In fact, the water got a bit cold so I taped up a bit of the inlet duct later. It does make you think that repositioning the water radiator, or just making a smaller inlet duct, would be useful. Perhaps I should go back to the VW, cheap but light, radiator as a test?

So, it was race 1 and I made a half decent start. I was right in the melée for a couple of laps and then ever so slowly I fell backwards. I was just getting out dragged on the back straight and I’m pretty sure that it’s just a power thing. Although, I could with getting a few kilos out of the car; I’ve got some plans how to achieve that.

Here’s the video of the first race, complete with a spin/near spin at about 7mins in. This was at Montreal and I must admit I’d really like the old Sear back… Montreal is just too slow. Oddly, I was regularly seeing 1.5g lateral here; I wonder if this is a feature of the new car because the old one never really  got above 1.2g?

After a great RGB BBQ on the Saturday evening we re-convened for the Sunday race. In many ways this was the same for me and I ended up driving round on my own thinking that I ought to look into getting an ’08 engine for next year.  Here’s the video:

In fact, on the way home my lovely wife convinced me that I really ought to look into changin the engine straight away, as otherwise I was wasting my time. 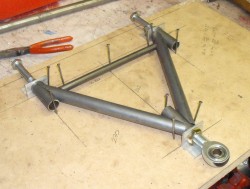 So, I’ve ordered a CBR1000RR08 engine package. It remains to be seen how long it was take to fit;I keep thinking of problems.

In the meantime, I’ve carried on replacing the suspension components with rod-ended ones. (I’ve no idea why I didn’t do this originally, it would have made much more sense. What’s more, the rod-ended ones are no heavier than the Delrin bearings.) Here’s the front lower wishbones being made. (Note that you can make nice jigs using MDF and, it makes a good place to do calculations as well!) 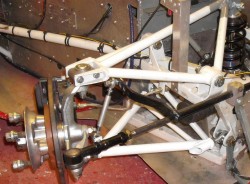 With those on the car, as in the next photo, I’ve only got the bearings in the front rockers to sort. I’m not too sure how to do this. I could make some housings to retain spherical bearings but I’m semi-reluctant to weld something into  these rockers and, therefore, make them irrecoverable. Perhaps that’s the only way though.

In the meantime I’m left with a humongous pile of old suspension bits, onto which I’ve lavished huge amounts of effort in the last. Ho hum. 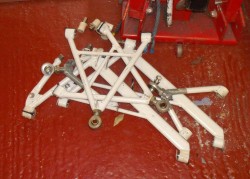 So, the next thing is to get the car up on stands and take out the engine. I’m planning on doing this in a manner that makes it dead easy to fit the engine back again in case I don’t get on well with the new one, which is hugely more complicated. Time will tell though.