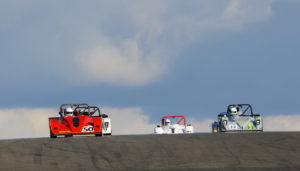 OK, it’s probably a bit early for festivities but I’m hoping that when I finish writing this page and, even, uploading it then it’ll still be too early for the festive season to have properly started. In which case you’ll be able to give this post your full and undivided attention.

I’m also planning on it being rather shorter than last time. 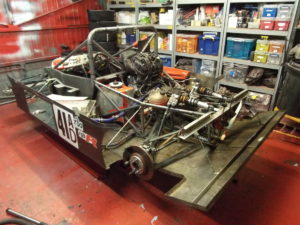 I also thought I’d start with a gratuitous photo from Donington Park that my good friend Charlie has just uploaded onto an unsuspecting world. Many thanks to him. The next photo, which should be on the left if the Gods of WordPress are feeling happy, shows the car sitting in the garage on stands with its bodywortkall removed. The plan is to do a fairly careful rebuild and fix a few minor things along the way. If you’re lucky I’ll actually document them here. This, though, is where it all starts. 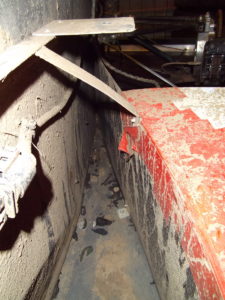 I’ll tell you a collection of things that I’m aiming to do this winter. I’ll probably manage about half of them if previous years are any guide. The really important one though, is to clean the thing. The trip through the mud at Rockingham was fairly dismal in that the mud seems to have got everywhere. The horrific photo here is the inside of the right hand side pod, inside the inner duct. As you can tell, in addition to the  usual crop of rubber which just appears everywhere then there’s a liberal quantity of mud just everywhere. I suspect this is particularly bad because I went through the aforesaid quagmire backwards. (Don’t ask!)

Anyway, all this is annoying me so much that I’m going to have to fix it. 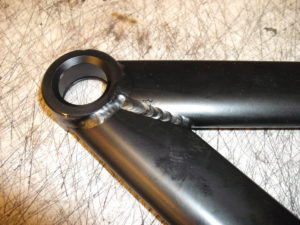 Along the way, I’d like to do some preventative stuff and carefully inspect all of the suspension. Along the way. I’d quite like to make some jigs in case I bend one of the suspension parts. When I bought the car I was promised that there would always be spares on the shelf but that hasn’t, as yet, turned out to be the case and I’d like to insulate myself from any problems. I couldn’t make some new parts as snazzy as the existing ones as in the photo, but I could make ones that would work and get me out of a hole. 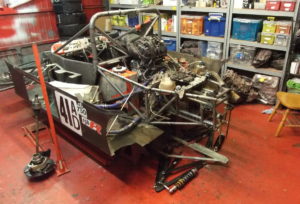 So, in preparation for all of that, I’m going to take of all of the suspension and turn the car into an unrolling chassis. That’s what’s in this photo, you can see the current wishbones on the floor at the back of the car. In fact, if you look carefully right at the rear of the car you can see that there’s still lots of mud on the chassis itself. This is really annoying me! 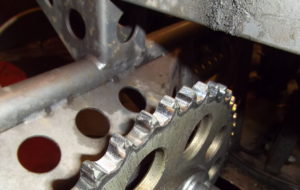 You can also see that part of taking off the suspension is removing the driveshafts. This is also necessary because I’m going to have to get some new sprockets. Here’s a close-up (ish) of the driven sprocket and you can see, if you look hard, that each tooth is pretty hooked by the load that the chain’s been putting on it. To be honest, it doesn’t look exactly well lubricated either and I’m wondering that as the Birkett was probably more running than in the rest of the season, and as the car was on track for half of the time,  then the lack of chain lube during that race might have been a contributory factor. In any case, I’ll need a new sprocket pair as the drive sprocket isn’t too clever either. What’s more, I’ll be replacing the chain as I do that every season anyway. That this is loads of chain lube, and associated grot, just above the sprocket on the chassis is another aspect of my desire to clean the car. 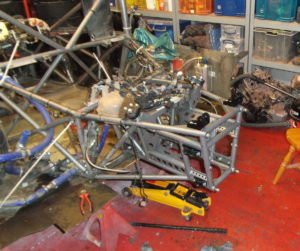 I also want to get the engine refreshed. The original plan was to refresh my spare engine and keep this one as the spare. However, I’m concerned about the level of abuse meted out to it in the Birkett so I’m going to get this engine refreshed. The only problem is I phoned Mike Smith to ask him when he could do it and he said he was completely snowed in until after Christmas. Hopefully there will still be time. In the photo here you can see the engine has, indeed, mysteriously disappeared. What’s more, again if you look hard, you can see that I’ve made a start on cleaning the rearmost part of the chassis. I spent ages trying various ways of cleaning it up and ended up using the Muc Off spray I use to keep my bike clean. Problem is, you need to rinse that off with water and the lack of wheels means I’m going to have a wet garage floor for a while.

Apart from all this, I also want to:

Doing some testing would also be nice! Along with all the usual stuff like changing the brake fluid I’m going to have my work cut out!