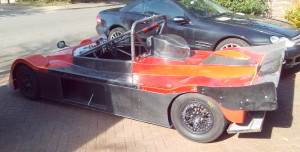 So, yet another race season (my 13th, I just worked out) is creeping up on us.  I thought I’d tell you what I’d been up to and show you a few photographs so you don’t get over excited when the racing actually starts.

The car actually looks like that photo at the top of the page at the moment, although it’ll be a bit changed by the time we get to Oulton Park for the first race of the season.

If you remember, in the last post, I listed some of the things I was planning on doing. I thought I’d list those again so you can see what’s been going on:

Make a crash box to support the splitter a bit better.

This one, I’m afraid, is still languishing on the “must do” pile. I really must do it.

This one is indeed done, and you can just about see so in the photo above. Mind you, what they don’t have at the moment is some nice returns around the wheel cutout (which would help with the stiffness although they don’t really need it). When I’ve got a moment, I’ll put the trimmed parts back in the moulds and make a mould to match where I’ve trimmed the parts to. I had originally planned to add such things to the moulds but I could never work out where to put them in advance. 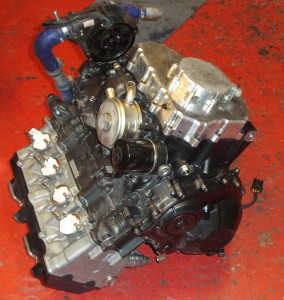 This one is also done and the refreshed engine is now in the chassis. In fact, here’s the engine sitting upside-down on the garage floor as I was “dressing it” ready for putting in the chassis.

What’s more, as I write, it’s done one test session with nasty old mineral oil in it (as insisted on by the engine builder). I have now, though, changed the oil to some nice synthetic superer stuff in preparation for the upcoming race weekend. 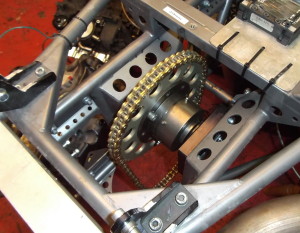 This is also done and, as I said, I’ve fitted a non-split driven sprocket. You can see this in the photo although this was taken before the engine was installed and, hence, the chain is just dangling.

Early indications are that the chain is running much more smoothly like this. There aren’t any “high spots” at all in the movement of the chain which is a nice change. 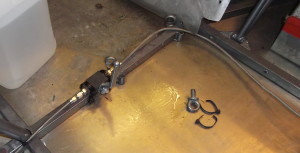 This is done, and it was very nice chucking the old handbrake disc and lever in the parts bin. The photo shows the lock on the floor of the car with the re-routed brake lines in the vicinity.

Early indications are that the hydraulic lock works fine. It certainly holds the wheels locked in the garage for a few days, even when only pushing the brake pedal by hand. I wasn’t able to check this while at the circuit the other day as I had a passenger seat in the car.

Also done, by adding some triangulation to the rear of the car.

This is also on the too hard pile, really it’s awaiting the crash box. 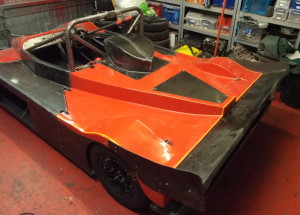 I’ve made some progress on the bodywork front. Essentially everything is now carbon fibre apart from the large front bodywork and the large rear bodywork. In the photo all the black stuff is carbon fibre with the red part being the only GRP moulding.

I’m still trying to work out how to make carbon parts for the two large mouldings. The big issue is finding somewhere to make the parts. The obvious place, of course, is the garage. The only issue is where does the car go?

I am, though, making some of the carbon parts red again. Mind you, it’d be quite nice if the car was just black carbon weave…

So, I’m nearly ready for the first race meeting. One thing that is nice is that all that carbon fibre has had the effect of lightening the car and stiffening the bodywork. (Carbon fibre/epoxy really is amazing stuff). If I got around to making the rest of the bodywork in CF I’d be underweight which, for me, is amazing.