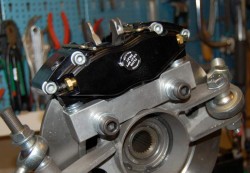 I ordered a set of taps from RDG Tools and tapped one of the brake mounting blocks to M10x1.5 for the mounting bolts through the calipers. The end result is shown in the photo here. I’ll make some spacers of the proper size, and get the correct length bolts, rather than using stacks of washers. However, it seems to fit fine which is good.

Apart that is, from the really annoying problem that the taps I ordered turn out to be duff in that they cut, and then wrecked, the threads. So, that mounting block in the photo above has nadgered caliper mounting bolt threads in it. This means I’ve chucked away one set of taps, ordered some more from somewhere else and I’m going to have to generate a lot more aluminium swarf in order to make another mounting block. However, the whole process seems to work which is good. It’s just very annoying that I’m going to have to waste half a day hunched over the lathe.

I need to get the the chassis off to the powder coaters. I phoned them yesterday and they said they’d go a small problem in that their shot-blaster had had “relationship problems” over Christmas (! 🙁 ) meaning that there was going to be a bit of a delay. That’s probably no problem as I’ve got lots to be doing. I’ll probably  try and take the chassis over at the back end of this week as I’m going to be dead busy next week anyway. 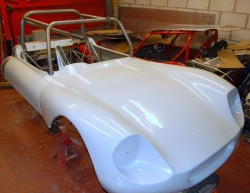 Next thing was to do the panelling over the top of the pedal box. However, I’m a bit unsure where the bonnet is going to be, so I put the pedals and steering column back on the car, and put the tub and, for the first time!, the bonnet on the car. It now looks like the photo here. (Except that the camera seems to get a bit confused about the colours.)

This means that I can now look underneath and have a look at how much clearance there is between the column and the underside of the bonnet, something that I’ve really  been guessing about up to now. 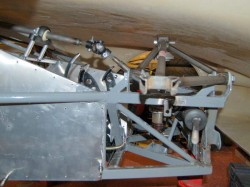 One of the reasons I bought the J15 is that I reckon it’s got a fairly small frontal area. That means the bonnet is low (and there’s no annoying induction lump in it).

As you can see, although the perspective is confusing, the suspension, positioned here at full droop, is pretty close to the bonnet, although there is about 30mm clearance so that’s OK. The steering column is well clear so there’s ample room to build an aluminium “tent” over the top of it.

After getting the chassis and other components ready to go to the powder coaters, that’s probably the next job. As you can tell, I’m putting off doing the rest of the really boring panelling.

At the right hand side of the previous photo, you can see the lower edge of the bonnet. Interestingly, there’s a substantial flat portion on the bottom of this bonnet. At first sight, this looks to be pretty much at the level of the bottom of the chassis. If so, that means I’ll be able to extend the undertray forwards so that the bonnet rests on it. I’m intending making it so that the bonnet just lifts off, rather than hinging things. As such, the undertray looks as though it’ll perform a couple of functions.