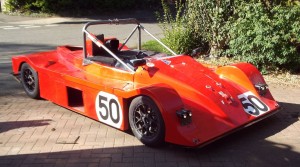 OK, late again, I know. All the same, let’s try and catch up, right up to the racing that happened (and also didn’t) at Brands Hatch last weekend.

We left it with me adding finishing touches like the seat covering and so on. Eventually, I pushed the car out onto the drive and took some photos, one of which is here.

If you’re alert you might notice that there isn’t a spoiler on the car. At the time I took this I was in the process of making a carbon fibre one. For various reasons that didn’t work out too well; mainly because I underestimated the necessary strength of the mould to withstand the vacuum of the resin infusion process. Consequently, I attached the aluminium spoiler as used last year to good effect and readied the car for a test outing to Snetterton.

And that turned out to be a bit of a disaster…

First lap out the engine temperatures were stupidly high after half a lap of the sighting (and therefore low speed) laps. I came back into the garage thinking that I had an instrumentation problem and set about looking at the data logger (of which more later). After some faffing about the numbers seemed ok so I set off for another go, and things were just the same again.

To cut a long story short it stayed like that until lunch time at which point the cooling system actually boiled over and I burnt my hand on the exhaust reaching in to check what that fluid was on the floor. (It was coolant.)

I spent the lunchtime at Snetterton thinking I had to go home and do the sidepod rebuild I’ve been planning to do for a while to improve the air flow through the radiators. Odd though, because it used to be OK, although the oil always was a little too warm.

Luckily, at lunch time Paul came along for chat and we jointly started wondering about the modified air intake. If it was working right then there was a chance that it was making the mixture lean which would make everything too hot. So, in a final act of desperation I changed the map in the Power Commander to add 10% to the fuel at all the load sites from 4000 rpm upwards and, bingo, the car was back to how it was before.

So, I spent the afternoon being, as usual at track days, the fastest thing on the track. I spent the time doing what I’d intended to do in the morning which was a complete sweep of the damper settings. As before, the car is very sensitive to the damper rebound settings. One click can take it from quick to undriveable. At least it’s doing something.

The one issue, in retrospect more important than I thought at the time as I was really concentrating on other things, was that the car was suffering from low speed understeer. In particular at corners like Montreal, Agostini and whatever the second bit of the Esses is. (It’s either Brundle or Nelson, I can never remember which is which.) I suspect that this is a mechanical issue which is being masked at faster corners (for example it was fine at Riches) by aerodynamic downforce from the at last decent bodywork.

So, after all that I booked the car in for a trip up to the fine people at Daytuner to get it mapped again. One of the jobs over the winter had been to add a lambda boss to the exhaust system so that would be easier than it was before.

As usual, watching a race car at full tilt on the rollers is a slightly alarming experience. It’s always particularly worrying to look at the chain which flails around in an extreme manner on the overrun. Check out the video:

All the same, the engine was now mapped and, as expected, Damien had added a lot of fuel into the map.

Back home it was time to think about the upcoming races at Brands Hatch. I’d booked the Friday morning for testing. I didn’t bother with the afternoon as testing at Brands is always so busy that you don’t really get much time. What’s more, they schedule things as half hour sessions which is pretty useless for one man teams.

So, we arrived at Brands on the Thursday evening and set up in the outer paddock; we’d have to move to the inner paddock in the evening as we’d got the garages for the weekend. Although that’s a bit of a faff as there was rain scheduled it should make for an easier life.

So, I had two sessions on track and the first one was a complete write off. Why? Because the car overheated, that’s why… At first I was looking again at the engine’s fuel map but after a while I noticed that some daft twit, I can’t imagine who, had left the relay that energises the water pump unplugged. I think I was checking the fan relay (which lives under the water pump relay) and must have left the damn thing unplugged.

Oh well, it’s kind of a surprise that this engine was still in one piece but it seemed to be OK so it was out on track again. As predicted it was very busy on track. All the same, the fastest lap I did was faster than I’ve ever gone around Brands to the tune of about a second. I’m still a way away from the fastest chaps but I’m not so distant as I was.

However, I still had rather hideous low speed understeer. I made a few tweaks to the car that might address this but I had no idea whether it was going to work in qualifying. The most obvious thing you’d do to sort this would be to reduce the front roll stiffness. However, with my modified front ARB I was already at full soft so, other than taking if off entirely, I was kind of stuck. 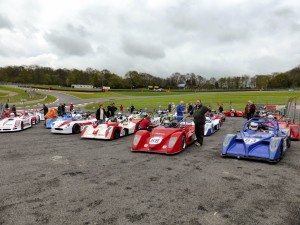 Come race day and it looked like a decent day. We all assembled for qualifying and looked rather glorious in the assembly area. Probably because few of the cars have any significant gravel rash at the moment.

Out on track and it was incredibly busy. I managed to get, by some miracle, two laps at 51.51 seconds which is faster than any other time I’ve recorded at Brands although still not fast enough. Those laps were good enough for 11th and 10th in the two races. I was still struggling with understeer though… 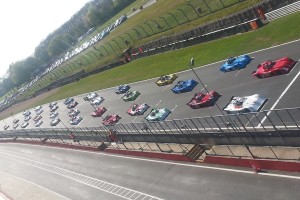 Later on in the day it was very sunny and we lined up for the race. Again, I thought the grid looked spectacular as you can see in the photo here, due to Joshua Barrett Photography.

However, that was about as far as it got. I got a lousy start really due to the fact that I need to make the handbrake work better. At Brands you essentially have to do a hill start at the start of the race and this time I got much too much wheelspin and slid, sideways, down the hill. By the time I got it together I was on the inside at Paddock Hill Bend, never a good place on lap one. I saw a gap on the inside and went for it and unfortunately there was a crunch and my nice painted bodywork got all battered in an instant. I pulled off and that was that for race one. Pity really… Here’s the extremely short video:

So, after driving back slowly to the garages I spent much of the evening doing a small amount of glass fibreing and hammering mountings back straight. I did lose a couple of bodywork clips and had to replace them with tie wraps; I’ll have to sort that for the next race.

Day 2 was a good deal less clement. The weather forecast was actually for it to stop raining at around 1400 and our race wasn’t scheduled until 1625. As such, there was a chance that the race would be dry. This year, there’s an added wrinkle because we’ve now got ourselves some wet tyres, Avon CR38s. That meant, of course, that we spent the entire day looking at the sky. 30 minutes before the race and it was still pretty wet but it wasn’t actually pouring down.

I eventually decided, when there was another rain flurry, that it’d be daft to put the A048s on an then aquaplane off into the scenery so I put on the wets and adjusted a few other things. However, when we got to the grid it was looking alarmingly dry. Oh well, if nothing else we’d discover what the Avons were like in the dry…

Come the start I was still struggling with the useless handbrake. However, this time the heeling and toeing yielded many fewer revs and I got a completely ballistic start. For a while I was running in 7th but I kept missing apices and started slipping backwards slightly. To be honest, there wasn’t much of a race other than James getting past me after one trip on the Paddock hill marbles and me then getting back past him again. I also stupidly let Olly past me easily because he had his lights on and I thought he was a leader lapping me. However, it was very nice to see the chequered flag, and nice to finish in 8th position. Here’s the video:

So, that was quite a reasonable weekend. I’ve now got to sort out the bodywork properly and work out what to do about the understeer. For the former I’m wondering if now is the time to try resin infusing a chunk of front bodywork. For the latter, I’m going to have to think about some way of softening the ARBs.

2 thoughts on “Keeping my cool”