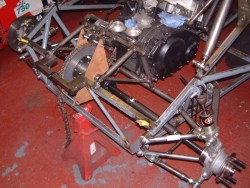 Of course, with it being Christmas and all, it’d be nice to think that I could make some good progress on the car. Admittedly, I do have some work to do, not the least trying to get some shape into what’s going to be in my PhD thesis which I’m supposed to write next year. I wonder what I’ll write about?

In between worrying about that, I did manage to get something done. Starting with the driveshafts I bought some skinnier tubing for sleeving the shafts and, coupled with moving the diff slightly, it does seem as though I might be alright at avoiding the chassis. Of course, the proper driveshafts should be skinnier again than these ones. So, I’ll press on at the moment.

The photo above shows the completion of this exercise, with two driveshafts in position. As I mentioned, the next step with these is to get some proper ones made. One concern here is that the shafts are of very different lengths. They’re on the rear so hopefully I won’t end up with armfuls of torque steer as a result but we’ll see. If that does happen, there are some approaches to it, such as using an additional bearing in the longer shaft, but I don’t really want to go there, at least not now. 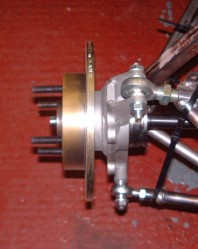 One thing I’ve been wanting to sort for a while is the rear brakes. The rear uprights are the same configuration as those for a Fiesta, if you remember I bought some proper Fiesta ones originally so as to get the hubs. However, as I want to use 4-pot brakes on the rear I’ve got to do something to arrange that. I spent quite a long time poring over catalogues of brake discs and decided that the best thing to try was some discs from a little baby Fiesta which are 10mm thick solid discs. The problem is the depth of  the disc as I’ll need to machine some mounts to fit.

The photo here, and indeed the one above, shows one of these discs in position. The caliper mounts are nearest the camera and there’s a decent clearance between the mounts and the disc.

However, there’s a problem in that the 4 pot calipers are quite wide, so the caliper projects a few millimetres beyond the wheel mounting face of the disc. This is not a problem in most road cars because they tend to use single piston calipers where the piston is on the inside of the disc. However, the 4-pots have a couple of pistons on the outside of the disc. The problem here is that don’t know whether this would actually be a problem, as it depends on the shape of the inside of the wheel. What I do know is that tried one of the Fury wheels (they’re Compomotive CXRs) on the Fiesta disc, as shown above and it fitted fine over the brake caliper. The problem with this is that the Fury wheels are offset ET19 whereas the ones I need for the J15 are ET38. If you’re not familiar with those numbers it relates to the lateral displacement of the wheel mounting face from the centre line of the wheel. “ET” is short for a German phrase: “Einpress Tiefe” which means something like “pressed in amount”. In this case ET19 means the wheel is inset 19mm in the car from the centre position. ET38 wheels have the wheels 19mm further in. Of course, that means that the disc/caliper gubbins is, relatively, further out. Of course, if the inside of the wheel face is shaped the same way on the two wheels then it wouldn’t make any difference. However, I do know that one of the ways that wheels are made is that a single casting is used for several different offsets, with the mounting face being machined to accommodate a range of offsets.

All of that means I haven’t got a clue whether these discs will fit. In fact, the only sensible approach really is to get some ET38 wheels and actually try it. So, I shall phone around  tomorrow and see if I can find a Compomotive CXR with the right offset. What’s to bet there won’t be any available until next August?

An alternative approach would be to use some discs with a deeper bell. The rear of the Fury does use such discs at the rear and I temporarily robbed one of them. The photo here shows that disc and one of the Fiesta ones side by side. The right hand one has a bell that’s about 12mm deeper. It fits fine on the J15 uprights but there’s another problem in that the clearance between the disc and the caliper mount is too small to get a bolt head, for clamping the caliper mount to the upright, in the space. It’s only 2.5mm too tight so it would be easy to space the disc out with a small spacer. However, that doesn’t seem very pleasant really. 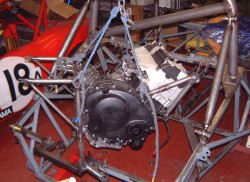 So, with the brakes returned to the back-burner, I got back to the chassis. It was, amazingly, time to take the engine out. This has gone from being perched on some thermalite blocks to being held in with a rather complex mount. I did want to know if it was possible to get the engine out with the mounts attached so I connected up the crane, took the bolts out and tried. It was possible, which was good. It wouldn’t be a huge problem if I couldn’t have done this, as it’s always possible to bolt the mounts to the engine when it’s in the right place. 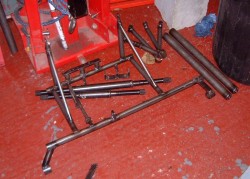 With the engine out I removed the mounts and took the backstays off the cage. I then took this photo of all the bits I’ve been making. All of these have got to go away. The driveshafts need to go up to Yorkshire to be turned into proper shafts and the rest of the stuff needs to get powder coated.

I do have a few bits that need doing to the chassis though, things that I’ve been leaving until I could invert the chassis so as to get at things more easily. 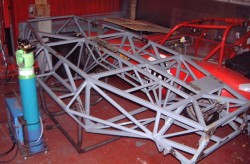 So, I turned the chassis upside-down as in the photo here. By the way, note the little trolley that the welder is sitting on. I made this a while ago and it’s made getting the welder around the garage much easier, I have no idea why I didn’t do it ages ago. That gas bottle is just about empty, I shall have to get it refilled before the Christmas break as doubtless the local BOC outlet will be closed at just the vital moment.

I’ve just about finished all the upside-down welding, I’ll do the rest tomorrow probably. The final thing I do have to do to the chassis, though, is look into the seat belt positioning. As I did on the Fury I think I’m going to have to put another tube into the roll cage so as to make sure that the belt angle fits with wearing a HANS device. This was the other reason for taking the engine out, actualy, as I need to sit at about the right place in the chassis to check where my shoulders are. 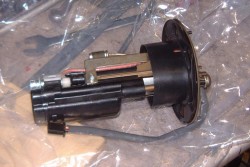 12 thoughts on “It’s a topsy-turvy world”